Take note to WHO this message is for…the Leaders.  This might be referring to the kings, the leaders, the priests…for me it is the people that teach others in the church today such as mentors, pastors, bible leaders, you, or me.

23 “Woe to the shepherds who are destroying and scattering the sheep of my pasture!” declares the Lord.

We need to be very careful who we take Biblical teaching from.  I have left churches (walked out of Bible studies or turned off podcasts)for this very reason.  The ONLY way you are going to discern Truth is by filtering it through the Word of God.  Quick story: a VERY close friend of mine this year decided to leave her husband.  She decided to choose happiness over holiness.  (I am not against a marriage breaking up for the right reasons according to biblical standards, my own mother is divorced for the right reasons).  Anyway, the ‘council’ that advised her that “life was too short not to be happy” was her WOMEN’S BIBLE STUDY.   The anger that festered inside of me over this was intense.

“Because you have scattered my flock and driven them away and have not bestowed care on them, I will bestow punishment on you for the evil you have done,” declares the Lord.

5 “The days are coming,” declares the Lord,
“when I will raise up for David a righteous Branch,
a King who will reign wisely
and do what is just and right in the land.
6 In his days Judah will be saved
and Israel will live in safety.
This is the name by which he will be called:
The Lord Our Righteous Savior.

Yes of course this is a double prophecy…well more than double:

Now the bad news.  We have read God’s view for weeks on the wickedness and judgment coming on the kings in the land, however, we have to recognize that they (and we) live in a world of false prophets.  People who twist God’s scripture for their benefit.  It’s everywhere! (I have done it without intent)

This section consists of seven different messages that Jeremiah delivered at various times, which the writer placed together in the text because of their common subject.

Here we are.   Assyria captured the Northern tribes.  150 years have passed and after sending Jeremiah to preach to them “REPENT or it will happen to you too Judah”…we know they don’t. NOW we begin the 3 waves of the Babylonian captivity. 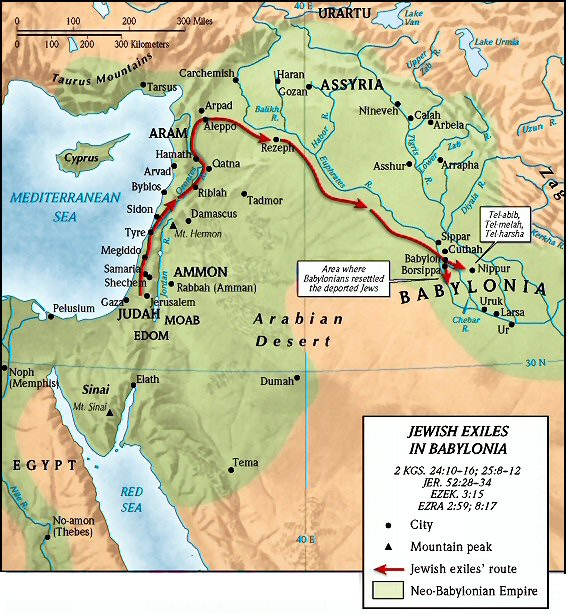 Chapter 24: After Jehoiachinson of Jehoiakim king of Judah and the officials, the skilled workers and the artisans of Judah were carried into exile from Jerusalem to Babylon by Nebuchadnezzar king of Babylon, the Lord showed me two baskets of figs placed in front of the temple of the Lord.

So it began during the reign of Jehoichin:

So we assume that the people that were taken away first were the “bad’ people right? Well, that is wrong.  When a nation is judged, and we know that a nation as a whole will be judged, the good news is The Lord knows who are His followers!! He knows the good figs from the bad fig!

6 My eyes will watch over them for their good, and I will bring them back to this land. I will build them up and not tear them down; I will plant them and not uproot them. 7 I will give them a heart to know me, that I am the Lord. They will be my people, and I will be their God, for they will return to me with all their heart.

By the way a Faithful man by the name of DANIEL was taken early!!  If you don’t know who Daniel is…you will soon!

Chapter 25: I HAVE to cut and past this!  It is a HUGE moment…we have been reading for hundreds of years waiting for this moment!! And the way the Lord announces Himself is epic…not The Lord says….but The Lord Almighty! (take that false idol!!)

8 Therefore the Lord Almighty says this: “Because you have not listened to my words, 9 I will summon all the peoples of the north and my servant Nebuchadnezzar king of Babylon,” declares the Lord, “and I will bring them against this land and its inhabitants and against all the surrounding nations. I will completely destroy them and make them an object of horror and scorn, and an everlasting ruin. 10 I will banish from them the sounds of joy and gladness, the voices of bride and bridegroom, the sound of millstones and the light of the lamp. 11 This whole country will become a desolate wasteland, and these nations will serve the king of Babylon seventy years.

Well now we have it.  The fine print.  God will use Nebuchadnezzar to destroy the rest of Jerusalem BUT the captivity will expire in 70 years!!

The cup of wrath: (this is going to hurt our hearts a little if you love Jesus)

15 This is what the Lord, the God of Israel, said to me: “Take from my hand this cup filled with the wine of my wrath and make all the nations to whom I send you drink it.

The cup represents the full force of God’s wrath on sin.  This was the same wrath that Jesus felt and took FOR us.  We deserve that full wrath…we are sin.  His wrath is so severe that even Jesus asked the Lord “is there ANY other way for you to save your people??”

Matthew 26:42 He went away a second time and prayed, “My Father, if it is not possible for this cup to be taken away unless I drink it, may your will be done.”

As prophesied we read about the judgment that will come up all the surrounding nations. You can read this with double meaning.  This will be literal in the day of the captivity BUT it also refers to end time.

Sorry, that was long….just great stuff to pick apart. Now I am LATE or work.