I thought about these “skits” that Ezekiel had to obey since they were symbolic of the Word of God.  We often talk about “what if people don’t have a Bible, how will they know the Word?  God can use anything from nature to dramas to speak a message to anyone.  The last gesture of shaving his head symbolizes mourning, disgrace, and humiliation.

A picture of what will happen to Jerusalem. (Symbolism)

12 A third of your people will die of the plague or perish by famine inside you; a third will fall by the sword outside your walls; and a third I will scatter to the winds and pursue with drawn sword.

In chapter 6 Ezekiel is told to speak towards the mountain.  Do you remember when we were talking about the kings…most of them had 1 thing in common: they did not destroy the high places.  The high places were pagan worship altars.  Most pagan worships were sexual “sacrifices”.  (or sacrificing their children to Molech)  They would partake in crude sexual acts with each other or with animals to please their gods. In chapter 6,  God says He will destroy such altars BUT He will spare a remnant. ❤

8 “‘But I will spare some, for some of you will escape the sword when you are scattered among the lands and nations.

Why will all of this take place?  Because of their unrepented sin.  BUT also for another reason….SO they will know He is THE Lord. 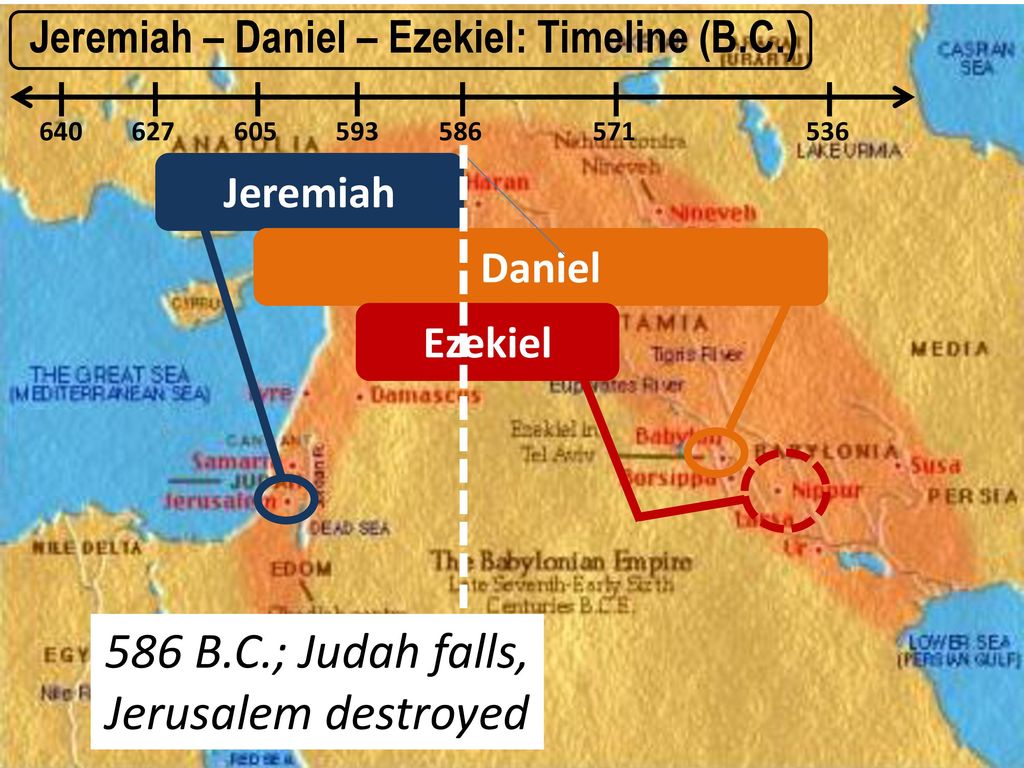 Without a date given, in chapter 7 you can see the event Ezekiel is talking about.  This is interesting because we spent months hearing about the Assyrians, Egyptians, and the Babylonians during the captivity however, God does not mince words with Ezekiel.  God speaks in the first person-“I will”. The sword will attack those outside the city, plague and famine will fall inside the city, and even those that flee to the mountain will be so scared they will lose their bodily functions.

17 Every hand will go limp;
every leg will be wet with urine.

These phrases “the end has come”, “the day comes”, “the time has come” pulls all the Prophet books together for fulfillment.  My mind went to the “Eschatology” view when I read this.  What will the End Times really look like?  I know we have a “picture” in our head (or at least I do), but if you have time re-read chapter 7- If God brought Judgement today who do you know that would be swept into this scene?  Begin with praying for them that their hearts to soften.  AFTER I became a Christ-follower I started hearing stories about all the “women bible groups” that knew my story was praying for me.  Not gossiping about me (I think).  Not judging me (I think).  Praying for me my heart to soften.   I had NO IDEA they were doing this until after I believed.  I read chapter 17 and I know it is Jesus that that saved me from ever experiencing a “Jerusalem destruction”  BUT God was also hearing the prayers of these women and acted on it!

Have you ever seen Ebeneezer Scrooge from the Christmas Carol?  Picture that when you read this: It is September 592 BC-

8 In the sixth year, in the sixth month on the fifth day, while I was sitting in my house and the elders of Judah were sitting before me, the hand of the Sovereign Lord came on me there. 2 I looked, and I saw a figure like that of a man.From what appeared to be his waist down he was like fire, and from there up his appearance was as bright as glowing metal. 3 He stretched out what looked like a hand and took me by the hair of my head. The Spirit lifted me up between earth and heaven and in visions of God he took me to Jerusalem, to the entrance of the north gate of the inner court, where the idol that provokes to jealousy stood. 4 And there before me was the glory of the God of Israel, as in the vision I had seen in the plain.

Ezekiel is lifted up between heaven and earth and given a vision.  A friend of mine said “It is like a Drive-in Movie theater” and I love that!  He is shown a history of abominations that take place in the temple.

He is seeing a vision of King Manessah: 2 Kings 17, the only king to actually put an idol IN the Temple!

2 KIngs 17:7 He took the carved Asherah pole he had made and put it in the temple, of which the Lord had said to David and to his son Solomon, “In this temple and in Jerusalem, which I have chosen out of all the tribes of Israel, I will put my Name forever.

God is showing Ezekiel that religious corruption began with the leaders of the nation.

Tamuz was once a human that became a “god” and was sent to the underworld.  Women would mourn over his death in a ceremony.

The fourth vision was: