You will see Jehu on the left side—-all the way to Jeremiah on the right side.  That is how long they have been obedient.  The point of offering them the wine was to show the people that the Rechabites were faithful to a vow from a man…yet God’s people would not be faithful to the Lord.

14 ‘Jehonadab son of Rekab ordered his descendants not to drink wine and this command has been kept. To this day they do not drink wine, because they obey their forefather’s command. But I have spoken to you again and again, yet you have not obeyed me.

Chapter 36 is one of my FAVORITE chapters.  Jeremiah sent his scribe to read the scriptures (Jeremiah was probably banned from the temple at this point.)  When Baruch goes and reads the scriptures, the people feared what they heard and took it to the King.

Picture the scene!!  They bring the scriptures to the King and He reads a few columns and the King says “Hey scribe, can I borrow the knife you use to sharpen your quill?” After he reads it the king cuts out the part he does not like, throws it in the fire!  So Baruch reads a bit more, and the king calmy cuts that part off and throws it in the fire…

23 Whenever Jehudi had read three or four columns of the scroll, the king cut them off with a scribe’s knife and threw them into the firepot, until the entire scroll was burned in the fire. 24 The king and all his attendants who heard all these words showed no fear, nor did they tear their clothes.

COULD YOU IMAGINE!  Actually yes I can…not only has it happened historically (BUT we do it every day!!  We cut out the parts we don’t like!! 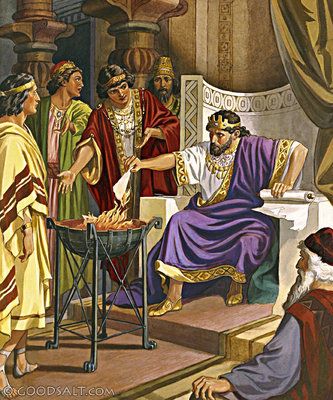 By the way, it never ends well for “Bible Burners”…

Greater men than Jehoiakim have burned Bibles or made them illegal through History.  You can destroy paper you cannot destroy the Word of God!

The grass withers, the flower fades,
but the word of our God will stand forever.

30 Therefore this is what the Lord says about Jehoiakim king of Judah: He will have no one to sit on the throne of David; his body will be thrown out and exposed to the heat by day and the frost by night. 31 I will punish him and his children and his attendants for their wickedness; I will bring on them and those living in Jerusalem and the people of Judah every disaster I pronounced against them, because they have not listened.’”

I love the beginning…Have you ever had that person in your life that “lives la vita loca” and when troubles come their way they say “can you pray for me?”

So this chapter we kind of talked about the other day when the Jews were under attack so they freed their slaves but then when the Babylonians got distracted dealing with Egypt and ignored attacking Jerualsm they took their slaves back thinking they were in the “clear….you think God is going to ignore his warning for 100s of years because of a small Egyptian distraction…

Jeremiah was imprisoned and king Zedekiah tiptoed in to talk to Jeremiah “pssst, psssst….hey Big J (his nickname)….have you heard from the Lord lately??  Can you tell me what he is saying??”

16 Jeremiah was put into a vaulted cell in a dungeon, where he remained a long time. 17 Then King Zedekiah sent for him and had him brought to the palace, where he asked him privately, “Is there any word from the Lord?”

Ummmmm the message did not change…..

“Yes,” Jeremiah replied, “you will be delivered into the hands of the king of Babylon.”

I think this story is hysterical!!