Good Morning! This past month, I have received very kind emails asking if I would post a “read-through blog.” After praying about it, I have decided not to, but I am reading through it. My goal is to find at least one word, verse, or passage that appears new to me each day and dig into it. I started last night, and I already called a friend and said, “why did God write….”.

The schedule I am using is the same as in 2021. If you would like a chronological schedule, click here. I pray some of you will read through it again this year with an accountability partner.

12 For the word of God is alive and active. Sharper than any double-edged sword, it penetrates even to dividing soul and spirit, joints and marrow; it judges the thoughts and attitudes of the heart.

The author of this book is unknown. Suggested authors have included Paul, Luke, Barnabas, Silas, or Apollos. The most common opinion is that the letter was written by Paul. (that’s not my opinion…what is yours?)

Much is unknown about the audience of Hebrews. Though it is addressed to both Jewish and Gentile Christians (since it mentions the Gentile Christian leader Timothy), much of the book emphasizes Christianity in relationship to Jewish teachings. Maybe that is why they titled it “Hebrews.” The theme of persecution is strong, and the temple sacrificial system appears to still be in practice, indicating a time before the destruction of Jerusalem in AD 70. In Rome, a likely audience was Jewish converts to Christianity during Nero’s persecution of Christians between AD 64 and 68.

Just like Romans was a foundational book for the Gentiles, this is the counterpart to the Jews in Jerusalem.

Something to chew on…

Think about this for a minute, before Christ came, all Jewish people were taught to make atonement for their sins through animal sacrifice.  It is an extremely important part of religion and their way of life.  So Christ comes as the Promised Messiah to fulfill all the ritual acts, specifically handed down from God himself.  Before Christ, they lived a legal life of order, sacrifice, hierarchy, priests…etc. So now that Jesus did come, and many Jews came to believe, what do you do with all they were taught their whole life? (some of you may be going through this personally as we read this New Testament together).

As long as there is a standing temple (and it won’t be for long), the Jews (even Christian Jews) will feel this human effort to make sacrifices to the Lord.  It makes sense; it would be tough to literally change everything taught for 2000 years.  So God breathes this letter through an unnamed author,  confirming all the Law was a SHADOW of The Christ to come.  ALL of it.

Shortly after this book is written to the Christian Jews, the Temple in Jerusalem will be destroyed, so God is preparing them for what is to come since only sacrifices and priests are part of a Temple Worship. (that is why Jews do not currently make sacrifices.

God needs to eliminate the temple to focus on Christ, not on ritual.  See, all that we learned in the Old Testament WAS a Shadow of Christ.  Partaking in any exercise that we think earns favor with the Lord in Salvation eliminates our Faith in the Messiah.

And if by grace, then it cannot be based on works; if it were, grace would no longer be grace. Romans 11:6

Of course, I had to put this… 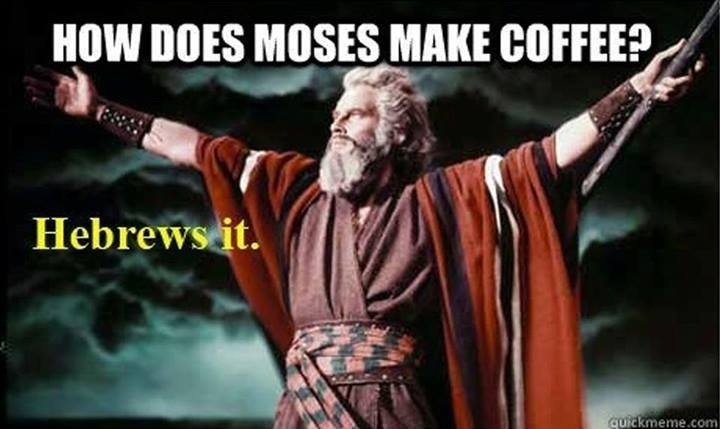 Please pray for one of our faithful readers,  Norma. Unfortunately, she is not healthy this morning and needs our prayers.

14 This is the confidence we have in approaching God: that if we ask anything according to his will, he hears us.

Underline how many times the word Spirit is used in this chapter.

Romans 8 is one of the most-loved chapters in all of Scripture. Paul begins and ends this passage with statements about the absolute security of those who are in Christ. There is no condemnation, at all, for those in Christ. Last, Nothing will ever be able to separate us from God’s love for us in Christ. By this, he refers to those who have been saved by their faith in Jesus (Romans 3:23–26). As Scripture clarifies, the promise of salvation is only given to those who believe in Christ. Those who reject Jesus reject God and will not be saved. For those who come to faith, their salvation is absolutely secure. Hardships may test their faith and strengthen it, but they never imply that God has abandoned His children.

We also share in Christ’s suffering, including the everyday suffering of living on this fallen planet. Paul is quick to say that our suffering here and now is not worth comparing to the glories of eternity, but he doesn’t say that this suffering doesn’t hurt.  Until then, we wait, and we suffer. But we don’t do it alone. God is with us spiritually in the form of His Holy Spirit, who helps us in many different ways. For one, he helps to take our prayers, even our unformed ones, to God’s ears. The Spirit intercedes for us to a God who is searching our hearts (Romans 8:26–27).

While we wait, we can also be absolutely sure of one thing: Our God is for us. He is working out every circumstance for our ultimate good.

That brings us back to where we started. Nothing, no matter how terrible, no matter how powerful, can ever separate us in any way from God’s love for us in Christ (Romans 8:37–39).

Chapter 9 (Difficult chapter for sure!)

Paul begins by declaring how heartbroken he is about the state of his people Israel. Paul was both Jewish and a Roman citizen. He and his father both served as Pharisees. Paul was truly a child of Israel. He was in such anguish for his people because they had, as a nation, rejected Christ. A few had believed, but Paul knew most Jewish people were trusting the law to save them from God’s wrath. Paul has gone to great lengths in Romans to show that the law cannot save. Shockingly, Paul says that he could wish to be cut off from Christ if, presumably, his people would come to Him (Romans 9:1–3).

Paul finds Israel’s rejection of the Messiah all the sadder because God has given her so many privileges as His chosen people. These include:

Paul insists that God will keep all His promises to Israel but that not everyone physically born an Israelite will be saved from God’s wrath (Romans 9:4–7).

To show that God can give His mercy to whomever He likes, Paul gives three examples from Israel’s history in Scripture.

Finally, Paul quotes from Scriptures in Hosea and Isaiah to show that God has called out some Gentiles to be His people while calling out a remnant—but not all—of Israel. He has called all of these out through faith in Christ. But, unfortunately, the Jewish people have stumbled over the stumbling block of Christ because they have sought to reach righteousness by their works instead of faith (Romans 9:25–33).

Chapter 10
Israelites continue to try to be declared righteous by God for their religious law-keeping, despite continuing to break that law.   Then we read one of the most quoted scriptures in the church probably:

BUT THEN hits them with the whole point: God shows NO favoritism:

11 As Scripture says, “Anyone who believes in him will never be put to shame.” 12 For there is no difference between Jew and Gentile—the same Lord is Lord of all and richly blesses all who call on him, 13 for, “Everyone who calls on the name of the Lord will be saved.”

For me, it is not about Jew or Gentile; it is about not having a single thought that God shows favoritism for the Deacon and not to the person on death row at a prison.

16 But not all the Israelites accepted the good news. For Isaiah says, “Lord, who has believed our message?” 17 Consequently, faith comes from hearing the message, and the message is heard through the word about Christ. 18 But I ask: Did they not hear? Of course they did:

“Their voice has gone out into all the earth,
their words to the ends of the world.”

19 Again I ask: Did Israel not understand? First, Moses says,

21 But concerning Israel he says,

“All day long I have held out my hands
to a disobedient and obstinate people.”

I LOVE when God speaks!  I went to Chattanooga today to visit my daughter at college.  I took her and her friends out for dinner.  I went to wash my hands and I passed a table in the section that was “closed” on the way.  The section was empty and there sat a Bible open on a table (at the restaurant!). I stopped and took a look.  This is exactly what I saw.  It was open to today’s reading.  ❤️. I never saw a person the whole night go near it.

Good Morning. I read the correct reading this morning but the title was wrong. 2 Sam 13-15. It is not a difficult read BUT it is one that you will need to pay attention to. A lot of names. I attached a highlighted family tree AND Quizlet notecards to help. Have a wonderful Saturday!

If you get the posts emailed to you, the title was wrong, and I edited it.  I am not sure if a corrected post gets emailed.  Click here for the full site to see the correction.