The last 3 chapters of God’s Word.

The Invitation is Given

9 Then the angel said to me, “Write this: Blessed are those who are invited to the wedding supper of the Lamb!” And he added, “These are the true words of God.”

11 I saw heaven standing open and there before me was a white horse, whose rider is called Faithful and True. With justice he judges and wages war. 12 His eyes are like blazing fire, and on his head are many crowns. He has a name written on him that no one knows but he himself. 13 He is dressed in a robe dipped in blood, and his name is the Word of God. 14 The armies of heaven were following him, riding on white horses and dressed in fine linen, white and clean. 15 Coming out of his mouth is a sharp sword with which to strike down the nations. “He will rule them with an iron scepter.” He treads the winepress of the fury of the wrath of God Almighty. 16 On his robe and on his thigh he has this name written:

KING OF KINGS AND LORD OF LORDS

And I saw an angel coming down out of heaven, having the key to the Abyss and holding in his hand a great chain. 2 He seized the dragon, that ancient serpent, who is the devil, or Satan, and bound him for a thousand years. 3 He threw him into the Abyss, and locked and sealed it over him, to keep him from deceiving the nations anymore until the thousand years were ended. After that, he must be set free for a short time.

Chapter 20- The Thousand-Year Period where Jesus will reign on Earth.

The Judgment of Satan

7 When the thousand years are over, Satan will be released from his prison 8 and will go out to deceive the nations in the four corners of the earth—Gog and Magog—and to gather them for battle. In number they are like the sand on the seashore. 9 They marched across the breadth of the earth and surrounded the camp of God’s people, the city he loves. But fire came down from heaven and devoured them. 10 And the devil, who deceived them, was thrown into the lake of burning sulfur, where the beast and the false prophet had been thrown. They will be tormented day and night forever and ever.

The Judgment of the Dead

21 Then I saw “a new heaven and a new earth,” for the first heaven and the first earth had passed away, and there was no longer any sea. 2 I saw the Holy City, the new Jerusalem, coming down out of heaven from God, prepared as a bride beautifully dressed for her husband. 3 And I heard a loud voice from the throne saying, “Look! God’s dwelling place is now among the people, and he will dwell with them. They will be his people, and God himself will be with them and be their God. 4 ‘He will wipe every tear from their eyes. There will be no more death’ or mourning or crying or pain, for the old order of things has passed away.”

5 He who was seated on the throne said, “I am making everything new!” Then he said, “Write this down, for these words are trustworthy and true.”

22 I did not see a temple in the city, because the Lord God Almighty and the Lamb are its temple. 23 The city does not need the sun or the moon to shine on it, for the glory of God gives it light, and the Lamb is its lamp. 24 The nations will walk by its light, and the kings of the earth will bring their splendor into it. 25 On no day will its gates ever be shut, for there will be no night there. 26 The glory and honor of the nations will be brought into it. 27 Nothing impure will ever enter it, nor will anyone who does what is shameful or deceitful, but only those whose names are written in the Lamb’s book of life.

Genesis 3:21 The Lord God made garments of skin for Adam and his wife and clothed them. 22 And the Lord God said, “The man has now become like one of us, knowing good and evil. He must not be allowed to reach out his hand and take also from the tree of life and eat, and live forever.” 23 So the Lord God banished him from the Garden of Eden to work the ground from which he had been taken. 24 After he drove the man out, he placed on the east side of the Garden of Eden cherubim and a flaming sword flashing back and forth to guard the way to the tree of life.

verse 21: The Lord sacrificed an animal, an innocent life was shed to cover their sin. The First Day of Atonement.  The plan of Salvation was set in motion.  Man was separated from the Lord for believing Satan’s lies.  The Lord loved us so much that he guarded the Tree of Life (immortality) SO THAT one day we will have a death and be resurrected to be in His Presence Forever.  The Tree of Life reappears for us. 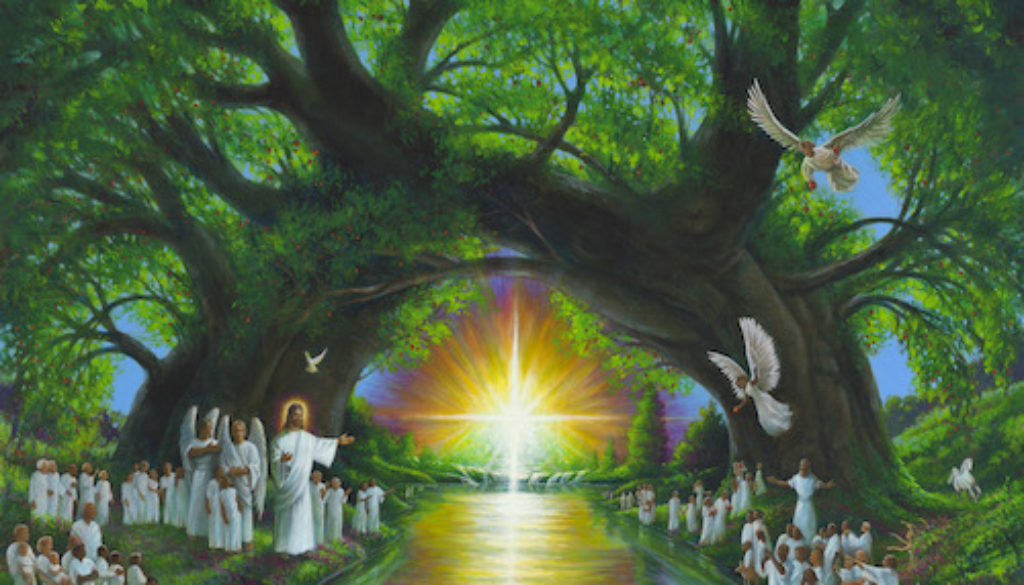 22:1 Then the angel showed me the river of the water of life, as clear as crystal, flowing from the throne of God and of the Lamb 2 down the middle of the great street of the city. On each side of the river stood the tree of life, bearing twelve crops of fruit, yielding its fruit every month.

22:14 “Blessed are those who wash their robes, that they may have the right to the tree of life and may go through the gates into the city.

16 “I, Jesus, have sent my angel to give you this testimony for the churches. I am the Root and the Offspring of David, and the bright Morning Star.”

20 He who testifies to these things says, “Yes, I am coming soon.”

21 The grace of the Lord Jesus be with God’s people. Amen.