Paul ends his letters to the Romans.  I am amazed at how applicable this is to us today. (I know it is all applicable, but this chapter stood out)

In Rome, many struggled with the food restrictions Moses put before the Hebrews to keep them separate from the Canaanites.  Many were also still commemorating feasts and festivals, while others did not.  They were “adding to grace.”  They did not fully understand the full measure of our freedom in Christ. Remember Romans 11:

6 And if by grace, it cannot be based on works; if it were, grace would no longer be grace.

As we now live in a world of denominations, we are quick to judge what other believers hold to as a practice.  This is not salvation doctrine, but the traditions, beliefs, and practices others do or not do (because they are Christian, not to be a Christian)

10 You, then, why do you judge your brother or sister? Or why do you treat them with contempt? For we will all stand before God’s judgment seat. 11 It is written:

“‘As surely as I live,’ says the Lord,
‘every knee will bow before me;
every tongue will acknowledge God.’”

12 So then, each of us will give an account of ourselves to God.

Paul wraps up how those strong in their faith in Christ should live in a relationship with weaker ones. From Romans 14, we know that Paul equates strong faith with a sense of freedom to participate in things formerly forbidden by the law of Moses or Jewish tradition.

Now, Paul insists that those strong in faith should trust God enough to please others above themselves.   Christ lived both as a servant to the Jews and fulfilling all of God’s promises to them. Those promises included God’s plan to include the Gentiles in His family one day.

Paul ends with ‘his plan’ to visit Rome as he passes through.

23 But now that there is no more place for me to work in these regions, and since I have been longing for many years to visit you, 24 I plan to do so when I go to Spain. I hope to see you while passing through and to have you assist me on my journey thereafter. I have enjoyed your company for a while.

His plan and God’s plan are not the same.

Before he comes there, Paul will stop in Jerusalem (a dangerous task right now for him) and leave an offering to build up the church in Jerusalem.

Seeing Paul’s love for Rome and his desire to go there on good terms breaks my heart.

31 Pray that I may be kept safe from the unbelievers in Judea and that the contribution I take to Jerusalem may be favorably received by the Lord’s people there, 32 so that I may come to you with joy, by God’s will, and in your company be refreshed. 33 The God of peace be with you all. Amen.

Sometimes our prays are not God’s plans.

Romans 16 is the final passage in Paul’s long letter to the Christians in Rome.

Phoebe is a servant of the church, a Cenchreae, a town not far from Corinth. She is described as a patron or benefactor to Paul and many others.  She will carry this letter to the Romans: a very dangerous task!

Priscilla and Aquila, a married couple Paul had spent much time within the ministry. Aquila was forced to leave Rome when Jews were banned from the city. Apparently, the couple returned after, perhaps accompanied by a man named Epaenetus, described as the first convert to Christ in the region where Priscilla and Aquila ministered.

5 Greet also the church that meets at their house.

Stop and think about that.  They are leading Bible studies.  Something you and I totally take this for granted.  Think about the post I wrote about Nero and the persecution of the Christians.  Perspective: if that were today, and you were caught on your phone seeing what “today’s reading is,” do you look over your shoulder to see if someone will capture you, tie you to a stake in his garden, and then during a party light you on fire (alive) so that the party guests can look around at all the pretty flowers?

The rest of Paul’s greetings include people we know little or nothing about outside of this list, though some seem to have been slaves, members of royal households, close friends, and groups that met together in several different house churches in Rome.

Before putting his quill down, Paul offers a quick warning about false teachers who might show up among the Christians in Rome.

Last, he sends greetings from those with him in Corinth, including his longtime partner and student in ministry Timothy ❤️.

Something new for me this year is seeing the “teamwork makes the dream work” approach.  For some reason, I pictured Paul traveling alone. But, instead, Paul seems to have always worked with a team. Which NOW makes all the scriptures about “gifts” and “being one body of believers” so much more important. 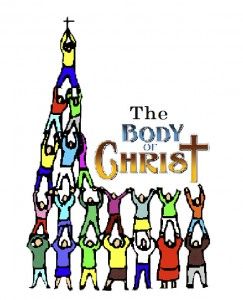 Take a moment to be thankful for all those who have paved the way for us.

5 Now to him who is able to establish you in accordance with my gospel, the message I proclaim about Jesus Christ, in keeping with the revelation of the mystery hidden for long ages past, 26 but now revealed and made known through the prophetic writings by the command of the eternal God so that all the Gentiles might come to the obedience that comes from faith— 27 to the only wise God be glory forever through Jesus Christ! Amen.