Before you read these, take a moment to put David’s life in perspective.  Some of us will relate to a time when this mimicked our own life on some level.  If you don’t, then look for the one verse you will cling to when trials will come your way.  Write them down and tuck them in your Bible.

David had reigned for decades as one of the most powerful monarchs in the world. He had extended Israel far beyond its borders. He had become wealthy, living in a palace with his many wives and servants. He had the absolute authority of life or death over everyone with whom he had dealings. No one dared to get on his bad side. 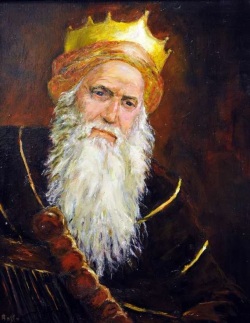 But then David sinned with Bathsheba and ordered the death of her husband, Uriah. Although David subsequently repented when the prophet Nathan confronted him, David’s sins set in motion a series of God-ordained devastating consequences.

David realized that to survive, he had to flee the capital immediately. All of his servants and their little ones grabbed what they could and took off towards the wilderness. David followed them, weeping, and walking barefoot with his head covered in shame.

It was David’s most traumatic, humiliating experience in his entire life. Everything that he had spent his life working for had suddenly unraveled. Many whom he had thought were allies and friends had abandoned him and the most painful wound of all was the betrayal of Absalom. It brought home to David his own failure as a father. One son was murdered, a daughter was raped, and the murderer was now after his own father’s life in addition to his kingdom. Life was falling apart for David.

Psalm 3 has been called the “morning psalm” while Psalm 4 might be the “evening psalm’.

Psalm 12 and 13.  Such an emotional contrast.  Trusting in Him yet feeling forgotten.

Psalm 28.  As a woman, I can say I am an emotional rollercoaster (most of the time).  This Psalm gave me Peace.

Psalm 55.  What is the battlefield?  Our thoughts.

1 Listen to my prayer, O God,
do not ignore my plea;
2     hear me and answer me.
My thoughts trouble me and I am distraught
3     because of what my enemy is saying,
because of the threats of the wicked;
for they bring down suffering on me
and assail me in their anger.

But as for me, I trust in you.