Everyone has their own way of studying…this is how I study this section:  I read 2 Samuel.  I research and study.  Then I read 1 Chronicles.  If at that point I understand 1 Chron, then I know I am “good to go”.  I also look to see which section is longer.  When I see 1 Chronicles is longer I know it is a “good” read because Ezra usually only wrote about obedience, not failure. (so if you see Samuel is the linger book…☹️

Well, David has been busy making babies.  Refer to the David Genealogy we printed. (click here). (Lacey I mailed this one to you)

David is no stranger to the Philistines.  Since the day of Goliath, the name Philistines has been in his life.  They have been enemies but David has been in their land hiding from Saul.  They grew accustomed to David being around until they heard he wasn’t JUST the king of Judah, now he has been anointed the King of Israel (and Judah).  You can see now the Philistines see him as a threat.  David,  even as a king, consulted with the Lord on all his decisions (for now).  Here is a map to go with the read.

If you went back to 1 Samuel 6 and 7 you would remember that the Ark was stolen by the Philistines and then when it was returned it was kept in a house….in a house!!!  Could you imagine the knock on the door that day!

If God had ignored this scene as they were bringing the Ark (The Lord) to Jerusalem He would be dismissing the process of how we spiritually and physically approach God.  If God had ignored this moment it would have said “All that I have taught you about who “I AM’”, was wrong and you don’t have to follow my decrees, as long as your heart is in the right place.  This has to be one of the best stories in the Bible to think about all day.  How do we view or approach the Lord?  Has Uzzah been living with The Ark in his house for so long he has grown “too comfortable” with the Presence of the Lord (ouch, right)?   I am so sorry if you like the song “I am a friend of God”, but it drives me crazy!  He is the Almighty, All-Knowing, All-powerful, Creator of the Universe!`Uzzah may have had his heart in the right place but how he approached the Lord was wrong and God used this as a HUGE “teachable moment” for David and the Israelites.

David himself took a 3-month “moment” to collect himself and move the Ark correctly.  Again, could you imagine the knock at the door at Obed-Edom’s house?  The Ark eventually will be in Jerusalem.  As David returns and follows the directions for properly moving the Ark, he brings it to a town called Gibeon, about 6 miles just outside the town of Jerusalem. 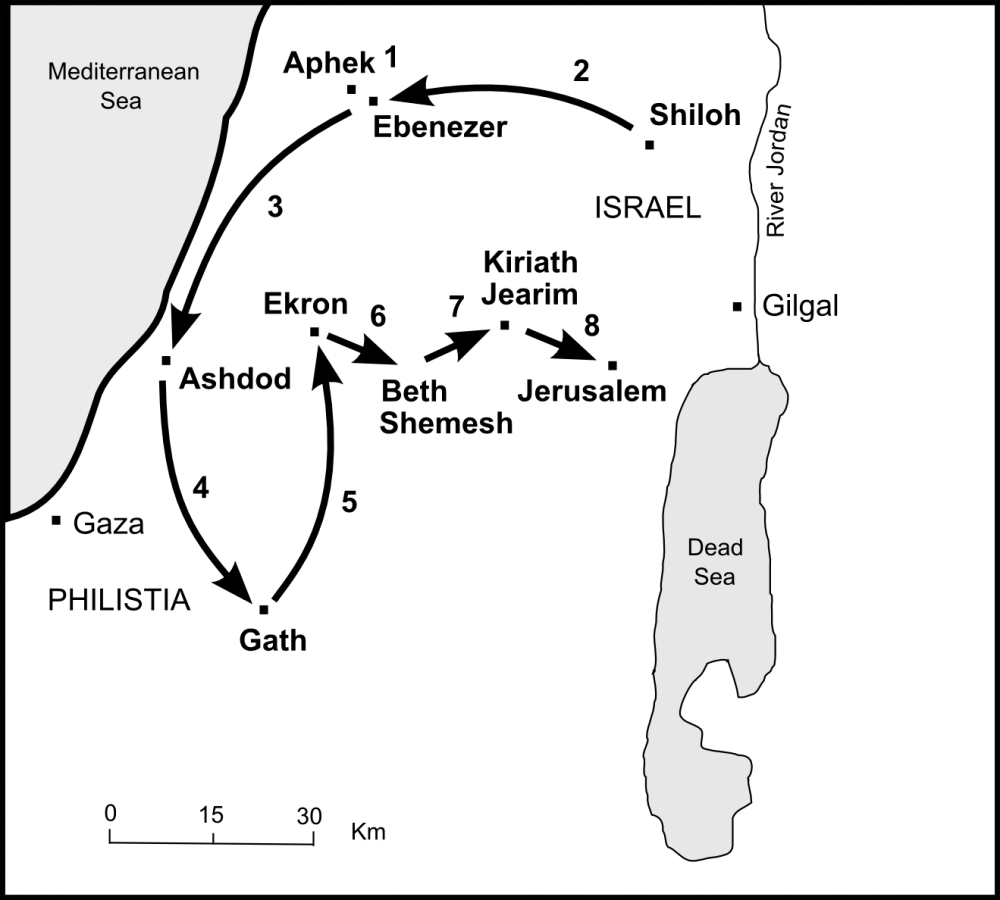 1 Chronicles: Besides the awesome detail (for geeks like me), how amazing is it to read Asaph and how the Psalms are incorporated.  I tend to think of them as scrolls that were written.  They were sang, read, memorized..used!

The next 2 days are Psalms.  Please mark your calendar for May 7th as we turn the page to 2 Samuel 7 and 1 Chronicles 17.  Let’s call this 7-17!  It is a HUGE HUGE READ that without it, I don’t know how anyone reads the New Testament!