Chapter 15: I think this chapter is an easy read but I get a lot of texts about a “How can a Loving God, wipe out (completely destroy) women, children, and animals”.  Chapter 15 is a perfect opportunity to break that down.   In verse 3 the Lord gives the command:

‘I will punish the Amalekites for what they did to Israel when they waylaid them as they came up from Egypt. Now go, attack the Amalekites and totally destroy all that belongs to them. Do not spare them; put to death men and women, children and infants, cattle and sheep, camels and donkeys.’”

Think of the Amalekites as cancer and Israel is the body.  Would a good Dr. say “take out most of the cancer, but leave a little in there”?  The Amalekites have been a cancer to the Israelites since day one.  They are brutal attackers that have a history of guerilla warfare.   They attack tribes, stealing their women and children (raping them), and their idolatrous religious practices will always be enticing to the Israelites.  I know if Merideth Grey was the Dr., she would get all the cancer from the body.

Saul disobeys God’s commandment (again).  Agag the king is captured and as Samuel points out “What is that bleating of sheep in my ears?” Saul did not come close to following God’s orders in this surgery!!

However, with love, I say:

Don’t throw a stone at Saul until you can read the Sermon on the Mount and see if you are Saul (do you pick and choose what to obey?  I am not talking about the subtitles: I am talking about the fine print) Click here.

Saul: He is impatient, disobedient, dishonest, and arrogant. But here is the deal, God is never without a plan.  We knew from the beginning Saul was not going to work out because we KNOW that the kingship must go through the line of Judah, not Benjamin!  So if you are not happy when politicians get elected into offices, have heart, maybe God is giving us what we ask for to show us what we really need: The Lord.

“Does the Lord delight in burnt offerings and sacrifices
as much as in obeying the Lord?
To obey is better than sacrifice,
and to heed is better than the fat of rams.
For rebellion is like the sin of divination,
and arrogance like the evil of idolatry.
Because you have rejected the word of the Lord,
he has rejected you as king.”

Without question, the offering of sacrifices was an important part of worship in ancient Israel BUT it was an empty ritual without proper motivation and obedience.  Genuine repentance and obedience are necessary accomplishments to the presentation of the sacrifice.   When we deliberately disobey the Lord’s commands, he rejects the sacrifice, in Saul’s case: He rejected him as king.

Samuel ends the chapter as a Judge when he killed Agag. 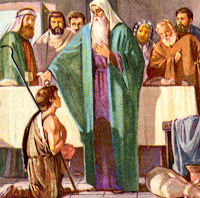 At the anointing of David in front of his 7 older brothers, he is empowered with the Holy Spirit and it will remain with him forever.  Simultaneously, God chose to withdraw the Spirit from Saul. (Remember it isn’t until Pentecost in Acts that the Holy Spirit is promised to all believers, so don’t panic that the Lord will do this to you).  An evil spirit (lower case ‘s’) will torment Saul as a means to get David into the palace, sort of like an apprentice.  He is very young and has a lot to learn.

Chapter 17- You can call it David and Goliath (I will call it God and Goliath).  I am going to say something true, ready?  Some of you have grown up in church or have attended church for a long time and you can “tell” this story.  Big guy..little guy…sling-shot… BUT I am betting that there are many of you that have NEVER actually read the whole chapter.  How do I know?  Because until recently I had never read it either (but I had seen veggie tales!)

(By the way, totally irrelevant but if you have HBO, watch the WWF Andre the Giant documentary, it’s fascinating) 😁.

Let’s get our geography:

(I bet you were expecting the slingshot picture 😋). You know I stay away from making an application or message from the Lord, but I would love t hear what your ‘theme was.