This is a VERY visual read.  I recommend listening to it while you follow the charts.  I will attach a “listen to here in a minute”.  Look at the visuals first to get your bearings:

If the focus of this book is DAVID as the Covenant Line that will bring the Messiah, look at the top—Jesse.  Does Jesse ring a bell?  Kind of? (It is ok to say NO, we are taking in SO MUCH INFORMATION THIS YEAR).  You can find him on many of the handouts so far, but here is the cool answer: Remember back in Genesis, Judah went and slept with what he thought was a town prostitute (it was really his widowed daughter in law, Tamar) and did not have any money so he gave her the “Scarlet Cord”.  At the time I talked about following that scarlet cord to Jesus…so in today’s read we begin with the sons of David, but it is important to see verse 9,  TAMAR (a female) is mentioned. You may recall the name Jesse from the end of the book of Ruth too.

Now look below, if you want to print it… click here.  You should be able to recognize Jesse and David so far.  Do you remember the ‘wife swap’ issue (Michal) with King Saul (left side of the chart).  As we read I want you to follow David—Solomon—-Rehoboam. So cool!  Pause it when you need to find your spot on the visual.  Click here to listen.

The Kings of Judah (If you have never read 1 and 2 Kings…here is the movie trailer). The 12 tribes of Israel are going to divide (like a civil war). Judah verse Israel.

Now look at the line of Rehoboam (left side) 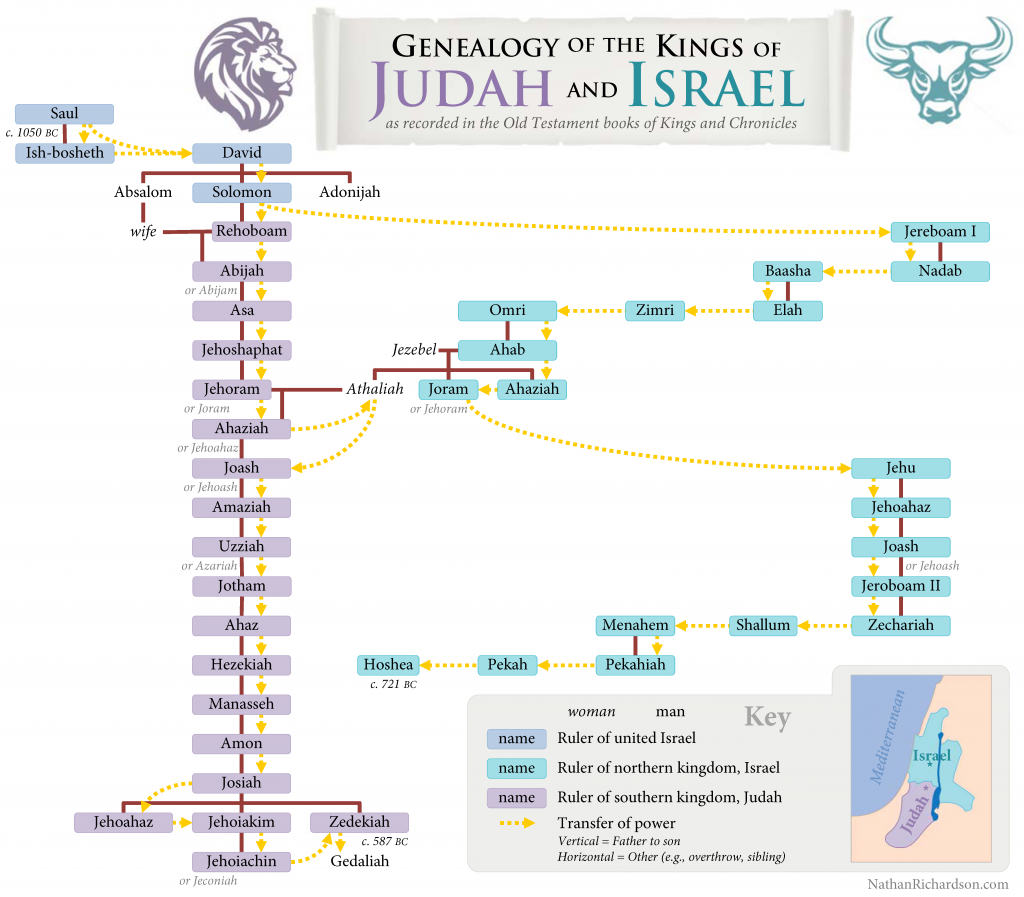 I will stop the visual line here but notice that 17 says:

17 The descendants of Jehoiachin the captive:

Verse 17-34: the descendants during a time when the nation will be taken as captives.  What???

Suddenly we have Jabez and his prayer: YOUR HOMEWORK IS TO RESEARCH IT AND WRITE ME A COMMENT ON IT!!!  .

In chapter 4 it is not surprising we find a short genealogy of Simeon.  Simeon wasn’t supposed to receive land (from when he avenged Dinah’s rape with the massacre at the circumcision). But Judah let them have some of their land. Look familiar?

But in Judges, Simeon cooperated with Judah so they sort of became one tribe for a while.

Chapter 5: Look at the map above again.  We now read about the 2 1/2 tribes on the east side of the Jordan River “Transjordan Tribes”. Reuben, Gad, and 1/2 of Manasseh all have genealogies listed.

I should have addressed this earlier (sorry).  If the author of this book is possibly Ezra, who is he and why is he writing this book?  Look at this timeline: 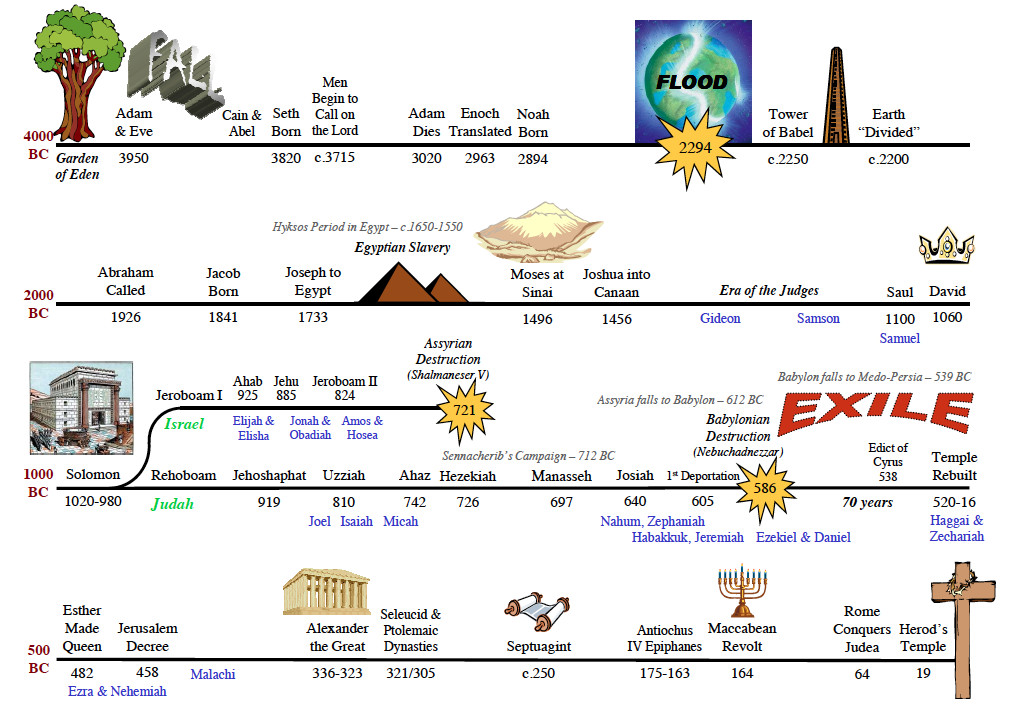 Look at 1000 BC.  After the Temple is built the nation is going to split as mentioned earlier.  Jeroboam and Rehoboam will be the first “divided kingdom”. The nations will be called “Israel” and “Judah”. Now, look at the last line: 482 BC- Ezra.  He is writing this AFTER the EXILE (the captivity).  He writes the Chronicles to show the genealogy of those who return to rebuild the temple.  So will he write about the line that does not return? No.   (Think of the issues we have regarding the Civil War monuments). Does that make sense?

25 But they were unfaithful to the God of their ancestors and prostituted themselves to the gods of the peoples of the land, whom God had destroyed before them. 26 So the God of Israel stirred up the spirit of Pul king of Assyria (that is, Tiglath-Pileser king of Assyria), who took the Reubenites, the Gadites and the half-tribe of Manasseh into exile. He took them to Halah, Habor, Hara and the river of Gozan, where they are to this day.

Only half of the divided kingdom will survive the Exile.  The line with the Covenant to Judah (The messianic line). Judah.

If you are confused, just keep going…it will all make sense when you do your 2nd read through one day. 🤪.   This book is written in hindsight.