In Geneses 3 we began talking about Atonement.  The covering of sin only God makes through a substitute, a sacrifice.  God appointed a yearly sacrifice to cleanse all the sins and impurities, not covered by the other sacrifices, that the Israelites committed ignorantly.    Stop where you are and read Hebrews 9.  Click here if you are not near a Bible.

How do people read the New Testament without the Old Testament??

The Day of Atonement took place six months after the Passover. These two festivals were half a year apart.   As for modern-day applications for Jewish people, it is called Yom Kippur.  For Christians, it is one of the 3 Feasts not fulfilled yet.

Moses received instructions regarding the Day of Atonement, immediately after the judgment of Nadab and Abihu.  The high priest had to make elaborate preparations for entering the Holy of Holies, by cleansing himself both spiritually and physically. The offerings he made were a bull as a “sin offering” and a ram as a “burnt offering,” both to cover his own sins (He is a foreshadow of our High Priest-Jesus, but until then we all need atonement, even the High Priest)

If you watched the video at the top you may have picked up on the garments.  Did you expect him to be wearing this?

On the Day of Atonement, the High Priest wore white linen, like the servants of the day wore.  Why?  He comes as a servant!   (Mark 10:45 For even the Son of Man did not come to be served, but to serve, and to give his life as a ransom for many.”) 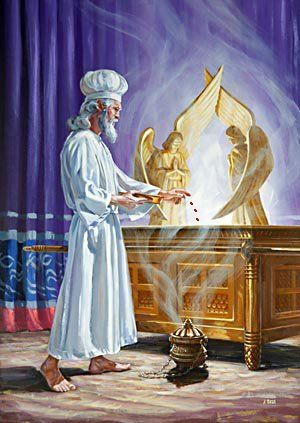 Then he “cast lots” (like rolling dice so the Lord made the decision, not the priest) to decide which of the “two goats” would die as a sin offering for the people, and which one would be sent as “the scapegoat” (the guilt of the sin) into the wilderness.  The sacrificed goat perished and the scapegoat took away the impurities and sins to the wilderness. The sacrificed goat is a picture of Jesus, the scapegoat frees us from the guilt of our sins.

(Now the only problem was that this goat sometimes wandered back into the Israelites’ camp, which nobody wanted to see because it was like having their sins come back on them. Supposedly, the person who led the goat into the wilderness often took the goat to a cliff and pushed it off. —the guilt never showed up again. 😂

“Be Holy because I am Holy”

The “goat idol” was a “god” that the Egyptians and other ancient Near Easterners worshiped. It was supposedly responsible for the fertility of the people, their herds, and their crops.  I am not going to go into details but people wonder why it specifically states not to have sex with animals…these were pagan rituals they brought with them from Egypt and existed in Canaan where they are headed.  These poor goats!

Since God forbade “eating blood” way before the Law given to Moses (Genesis 9:4), people today should also refrain from eating it (I am not talking about Outback Steakhouse).  In Moses day, the pagans superstitiously linked blood consumption with acquiring divine powers (who saw the “eating of the heart” episode on G.O.T.?)  Same concept.

The faithful worshiper of the living God must preserve the
sanctity of sacrificial blood, recognizing that life (signified by
blood) belongs to God.”

Ends with: 30: Keep my requirements and do not follow any of the detestable customs that were practiced before you came and do not defile yourselves with them. I am the Lord your God.’”

The Israelites moved from one idolatrous county and are heading to the next.  The culture of these nations was worldly desires as well as idol worship.  Speaking of, is anyone watching this season of American Idol?  So much talent this year!

I don’t think you will need help understanding most of these commands but I want to point out one. And NO I am not going to make any jokes about the state of Kentucky forgot to read chapter 18 😂

I know we read of these in shock like 18:23 BUT know that all of these adulterous acts were done when this was said…and unfortunately will be repeated.

18:21 the Molek or Molech (depending on your version).  Moloch was a statue with the head of a bull and arms out-stretched as a representation of him receiving the children being sacrificed. “Molech was a Canaanite god (actually translated ‘king’, often represented by a bronze image with a bull’s head and outstretched arms. The idol was usually hollow, and workers would build a fire in it.   The statue would get red hot from the fire.  When the arms changed colors from the heat (red), the pagans would lay their infant on the arms as an offering to their gods.  We have also uncovered documents that they would just put the baby into the fire (like a hot furnace)

As we get deeper into the Bible, we can put  Baal, Ashtoreth, and Molech all in the same category.  I am often amazed that even as pagans we are are built with an innate natural instinct to know deep inside us that “someone” must be sacrificed…sad they missed this one for a Jesus.