The Plot against Jesus

When Jesus had finished saying all these things, he said to his disciples, 2 “As you know, the Passover is two days away—and the Son of Man will be handed over to be crucified.”

The city of Jerusalem would be filled with people.  Three times a year, adult males (12 and up) were required to go to the Temple for a festival.  However, Passover was the “Superbowl” of all the festivals.  It is estimated 2.5 million people descended into the city.

The Jewish council met at the High Priest’s palace and plotted to kill Jesus.   Do I need to repeat that so you can get the full magnitude of ALL that is wrong with that statement?

The Jewish council met at the High Priest’s palace and plotted to kill Jesus.

The High Priest should have been a descendant of Aaron, passed down through a genealogical line after the elder passed. Right???  Caiphas was the son-in-law of a still-living High Priest named Annas.  Caiphas was “appointed” the High Priest as a figurehead from the Romans.  Don’t get me started down that rabbit hole!! 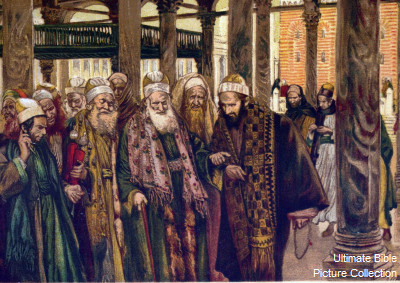 Remember, the Jewish Council in JUDEA could have their “own” little government as long as they adhered to the Roman Law, paid their taxes, and did not cause any problems.  So they were smart enough to know that this would cause quite the stir with 2.5 million people from ALL over.  EVERYONE who lived in traveling distance went to Jerusalem…it was a cash cow for business owners from all over for both the Jew or Gentile.

So we have covered this account earlier BUT I always read it to see what stands out.  I knew the phrase: 12 When she poured this perfume on my body, she did it to prepare me for burial would strike my heart BUT the one that I think was just added (I promise I never saw it before) was:

13 Truly I tell you, wherever this gospel is preached throughout the world, what she has done will also be told, in memory of her.”

After Jesus was baptized he was led to the wilderness for 40 days to be tempted by the devil.  After that scene, it ended with:13 When the devil had finished all this tempting, he left him until an opportune time.

Well, this is the opportune time. In Luke 22:3, we see that Satan entered into Judas before Judas went to see the chief priests and set things up to betray Jesus. Satan possessed Judas in hopes of using him to destroy Jesus’ ministry and get Him out of the way. In Hebrew culture, thirty pieces of silver was not a lot of money. In fact, it was the exact price paid to the master of a slave if and when his slave was gored by an ox (Exodus 21:32). The slave’s death was compensated by the thirty pieces of silver.   Click here for video.

The Passover was the first day of a weeklong festival of the Feast of Unleavened Bread.  They were commemorating their redemption from Egypt.  They would retell the account of Moses leading them out of Egypt after God proved He was the ONLY God by sending 10 plagues (to combat the 10 godheads in Egypt). The last god was Pharoah.  Anyone who shed the blood of a spotless and perfect lamb put the blood on the doorpost and believed they would be saved: the angel of death would Pass-Over them, and they would be free.  They would exit Egypt so quickly that they were to make bread for the exodus.  They did not put yeast in the bread (ain’t nobody got time for that!!) so they commemorate God’s provision with the Feast of Unleavened Bread.

I am not sure why Leonardo DaVinci painted it this way (“Hey, everyone get on this side of the table for a selfie”). 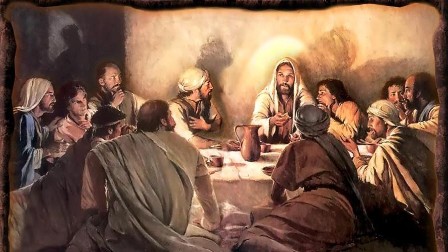 On the 3rd cup Jesus says:

27 Then he took a cup, and when he had given thanks, he gave it to them, saying, “Drink from it, all of you. 28 This is my blood of the covenant, which is poured out for many for the forgiveness of sins. 29 I tell you, I will not drink from this fruit of the vine from now on until that day when I drink it new with you in my Father’s kingdom.”

Jesus celebrates the LAST Passover supper.  He is fulfilling it. Salvation comes through Christ and the sacrifice of His physical body on the cross.

(More is added in Luke and John 😁)

31 Then Jesus told them, “This very night you will all fall away on account of me, for it is written:

“‘I will strike the shepherd,
and the sheep of the flock will be scattered.’

32 But after I have risen, I will go ahead of you into Galilee.”

Jesus quotes from the Messianic prophet-Zechariah! Click here to read.  Peter gets a bad wrap as the one that denies Jesus BUT all his disciples flee when they come to arrest him.

36 Then Jesus went with his disciples to a place called Gethsemane, and he said to them, “Sit here while I go over there and pray.” 37 He took Peter and the two sons of Zebedee along with him, and he began to be sorrowful and troubled. 38 Then he said to them, “My soul is overwhelmed with sorrow to the point of death. Stay here and keep watch with me.”

Look at a map:  Jesus would pass over the Kidron Valley to go to the Garden.  On the first day of the Festival (before the Passover Supper), the lambs would have been slaughtered.  Approximately 285,000 lambs were slaughtered that day at the Temple.  They would build funnels to drain the blood efficiently downhill and away from the city.  It would pour down into the Kidron Valley.  Picture Jesus crossing over to pray, seeing the blood-soaked land, knowing His will be added to it.

The garden at Gethsemane, a place whose name literally means “oil press,” is located on a slope of the Mount of Olives. (We could sit on this symbolism all day!!…maybe tomorrow). Jesus moved away from the three men to pray, and twice He asked His Father to remove the cup of wrath He was about to drink, but each time He submitted to the Father’s will.  (In Luke God sends an angel from heaven to strengthen Him).

Before Judas was even on the scene, Jesus says “the time has come”

45 Then he returned to the disciples and said to them, “Are you still sleeping and resting? Look, the hour has come, and the Son of Man is delivered into the hands of sinners. 46 Rise! Let us go! Here comes my betrayer!”

Then Judas came and handed him over with a kiss, a sign used for  “honor and respect”.  A large crowd armed with swords and clubs arrested him.

Amazing how the Jewish leaders rebuked Jesus for healing on the Sabbath, but they now hated Him so much that they are willing to throw all the Laws out just to kill Him.

We have several days to read this.  I will get into more detail as the week goes.