We already had the 3 illegal religious trials before Annas and Caiaphas.  We skimmed over the political ones.  Luke goes into the secular ones in more detail.

23 Then the whole assembly rose and led him off to Pilate.2 And they began to accuse him, saying, “We have found this man subverting our nation. He opposes payment of taxes to Caesar and claims to be Messiah, a king.”

The people continued talking to Pilate and when they said: “He stirs up the people all over Judea by his teaching. He started in Galilee and has come all the way here.”

Oh, the relief that must have come over Pilate!  That’s not his Jurisdiction!   Send Jesus to the guy in charge of Galilee!  Well, God has everything orchestrated perfectly…Herod just happens to be in Jerusalem for the Passover.  Of course, Herod would want to see Jesus, who wouldn’t!

Herod wants to see the “magic acts”, wanted to see if he was John the Baptist raised from the dead and because he had never met him!  So they played the “Kings Game” dressing him in robes and mocking him.  I have always been surprised that Herod did not order the death of Jesus.  He was an Idumean (from the line of Esau) and wanted the Jews to like him.  But the OT prophecies always have Jesus “lifted up” in death.  Not by beheading (Herod’s style), not by stoning (the Jewish style), but by Crucifixion.  The only people that could ‘order’ a crucifixion were the Romans.

So back to Pontius Pilate Jesus was sent.

The 2 criminals on their Crosses.  Before the two criminals, we see Jesus asking God to forgive those crucifying Him, for they did not know what they were doing.  However, the two thieves:  One recognizes he is a sinner!  He admits he deserves death.  He confesses.  He is Saved!

12 Therefore I will give him a portion among the great,
and he will divide the spoils with the strong,
because he poured out his life unto death,
and was numbered with the transgressors.
For he bore the sin of many,
and made intercession for the transgressors.

44 It was now about noon, and darkness came over the whole land until three in the afternoon, 45 for the sun stopped shining. And the curtain of the temple was torn in two. 46 Jesus called out with a loud voice, “Father, into your hands I commit my spirit.” When he had said this, he breathed his last. 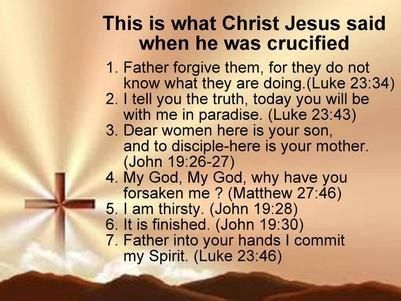 The Burial of Jesus

50 Now there was a man named Joseph, a member of the Council, a good and upright man, 51 who had not consented to their decision and action. He came from the Judean town of Arimathea, and he himself was waiting for the kingdom of God. 52 Going to Pilate, he asked for Jesus’ body. 53 Then he took it down, wrapped it in linen cloth, and placed it in a tomb cut in the rock, one in which no one had yet been laid. 54 It was Preparation Day, and the Sabbath was about to begin.

A member of the Sanhedrin Jewish Council makes a public profession of Faith.  He ensures that Jesus is not thrown into a criminal grave, but given the honor of a tomb that has not been used.  This wealthy man fulfills another scripture in Isaiah 53

He was oppressed and afflicted,
yet he did not open his mouth;
he was led like a lamb to the slaughter,
and as a sheep before its shearers is silent,
so he did not open his mouth.
8 By oppression and judgment he was taken away.
Yet who of his generation protested?
For he was cut off from the land of the living;
for the transgression of my people he was punished.
9 He was assigned a grave with the wicked,
and with the rich in his death,
though he had done no violence,
nor was any deceit in his mouth.

31 Pilate said, “Take him yourselves and judge him by your own law.”

“But we have no right to execute anyone,” they objected. 32 This took place to fulfill what Jesus had said about the kind of death he was going to die.

“Shall I crucify your king?” Pilate asked.

“We have no king but Caesar,” the chief priests answered.

16 Finally Pilate handed him over to them to be crucified.

19 Pilate had a notice prepared and fastened to the cross. It read: Jesus of Nazareth, the king of the jews. 20 Many of the Jews read this sign, for the place where Jesus was crucified was near the city, and the sign was written in Aramaic, Latin and Greek. 21 The chief priests of the Jews protested to Pilate, “Do not write ‘The King of the Jews,’ but that this man claimed to be king of the Jews.”

Every verse is a fulfillment if we look hard enough!

This happened that the scripture might be fulfilled that said,

“They divided my clothes among them
and cast lots for my garment.”

So this is what the soldiers did.

Dogs surround me,
a pack of villains encircles me;
they pierce my hands and my feet.
17 All my bones are on display;
people stare and gloat over me.
18 They divide my clothes among them
and cast lots for my garment.

33 But when they came to Jesus and found that he was already dead, they did not break his legs. 34 Instead, one of the soldiers pierced Jesus’ side with a spear, bringing a sudden flow of blood and water. 35 The man who saw it has given testimony, and his testimony is true. He knows that he tells the truth, and he testifies so that you also may believe. 36 These things happened so that the scripture would be fulfilled: “Not one of his bones will be broken,” 37 and, as another scripture says, “They will look on the one they have pierced.”

But he was pierced for our transgressions,
he was crushed for our iniquities;
the punishment that brought us peace was on him,
and by his wounds we are healed.