If you have not read yet-flip back to Chapter 19.  This is a continued conversation.  This parable follows the rich man’s story.  The crowd listening is the rich, poor, Pharisees, tax collectors, beggars…all were there.  This parable will speak to each “category” equally.  The Pharisees think they deserve more, the disciples who left everything now want to know what their reward is going to be,  they think they deserve more.  God will give grace to those He chooses through faith-whether it be in the first hour or the last.  You cannot earn it.

Chapter 20-The first group of workers in the vineyard resented receiving the same wage as the last group. Their attitude was similar to that of the Pharisees, who were furious at Jesus’ teaching that others could inherit a heavenly kingdom they thought was reserved for them alone. They despised Jesus for offering the kingdom to poor, oppressed, weak sinners who He made equal to them.

Here is an interesting thought.  The first set of workers were offered one denarius (a Roman soldier’s daily wage).  Generous!!  So when he paid the 4th group the same wage would we think “this is unfair” or “Wow, this landowner is VERY generous”?   If someone becomes a believer early in life…God is generous to save them.  If a person believes much much later in life, is He unfair to save them equally?  No.  How generous is the Lord to save all those who believe?

17 Now Jesus was going up to Jerusalem (for the Passover). On the way, he took the Twelve aside and said to them, 18 “We are going up to Jerusalem, and the Son of Man (the Messiah) will be delivered over (implies betrayal) to the chief priests and the teachers of the law (The Jews). They will condemn him to death (means legal proceedings) 19 and will hand him over to the Gentiles to be mocked and flogged and crucified (only Romans had the authority to crucify). On the third day he will be raised to life!” (Resurrection) 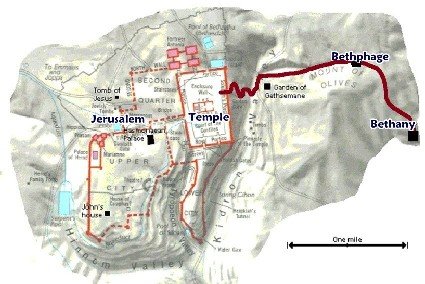 Jesus was taking His disciples up to Jerusalem for the Passover celebration there. While there, the Son of Man would somehow be “delivered” over “to the chief priests and scribes,” His antagonistic opponents. This implied a betrayal (cf. 17:22). They would “condemn Him to death.” This implied legal proceedings. He would fall under the control of the “Gentiles,” who would ridicule (“mock”), torture (“scourge”), and “crucify” Him. The Romans were the only Gentiles with the authority to crucify; the Jews did not have this power under Roman rule. Three days later Jesus would “be raised up” to life. 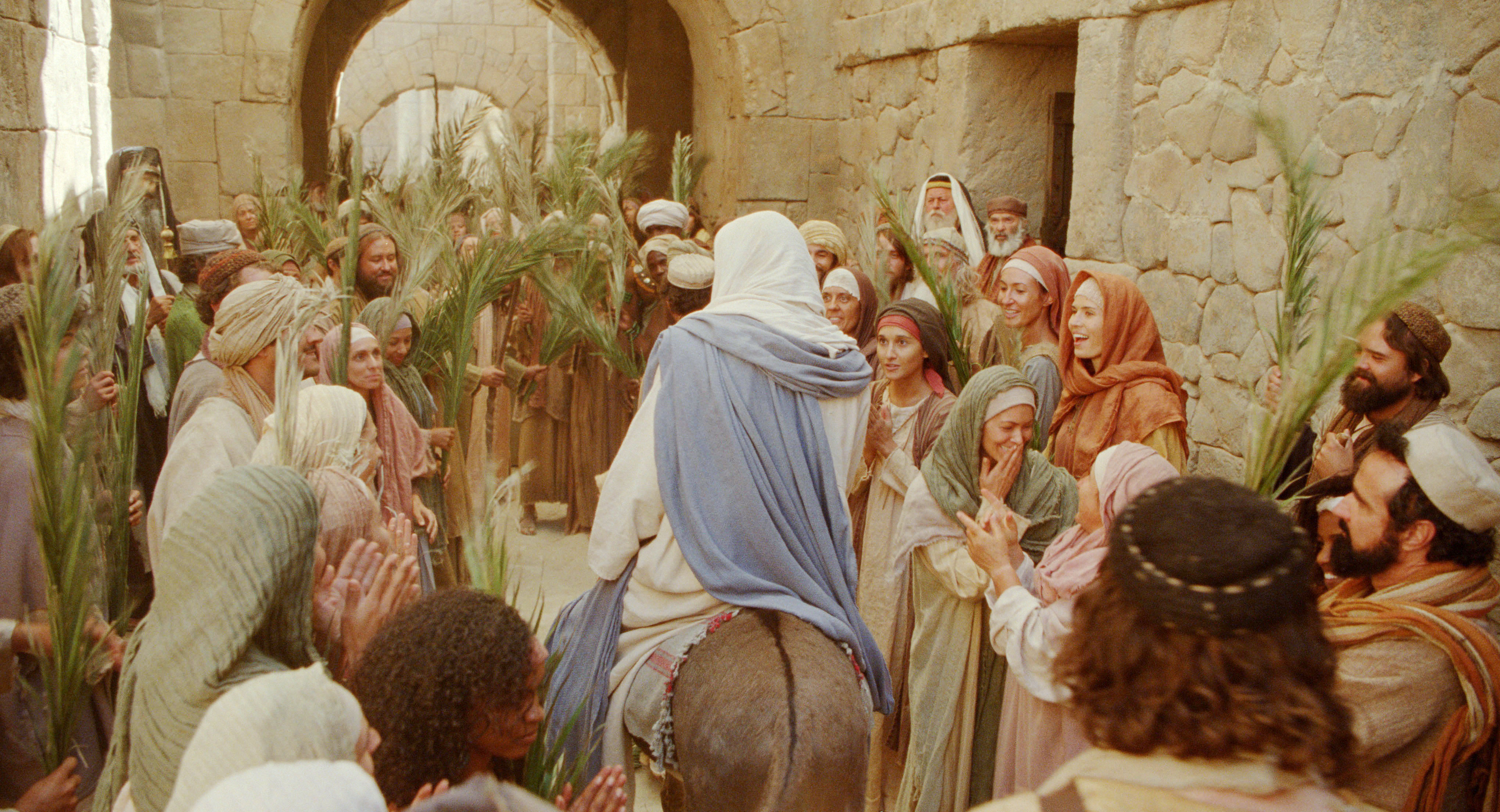 Think about all the times Jesus came to Jerusalem during His ministry.  He would slip in, unnoticed, through the Sheep’s gate (so symbolic).  This time, He makes His presence known!  He fulfills the detailed prophecy in Zechariah 9:9

Rejoice greatly, Daughter Zion!
Shout, Daughter Jerusalem!
See, your king comes to you,
righteous and victorious,
lowly and riding on a donkey,
on a colt, the foal of a donkey.

Kings entered their city in 1 of two ways:

As Jesus entered proclaiming He is the king, people from all over were there for the Passover Festival began quoting Psalm 118:

26 Blessed is he who comes in the name of the Lord.
From the house of the Lord we bless you.
27 The Lord is God,
and he has made his light shine on us.
With boughs in hand, join in the festal procession
up to the horns of the altar.

(I spent a lot of time researching which Gate Jesus may have entered.  I can’t be certain but we know that it would be from the East moving west (same as the way we entered the Tabernacle, through the tribe of Judah 😁 in the OT). Probably the Golden Gate (Lion’s gate). In Hebrew, it is Sha’ar Harahamim, the “Gate of Mercy.” 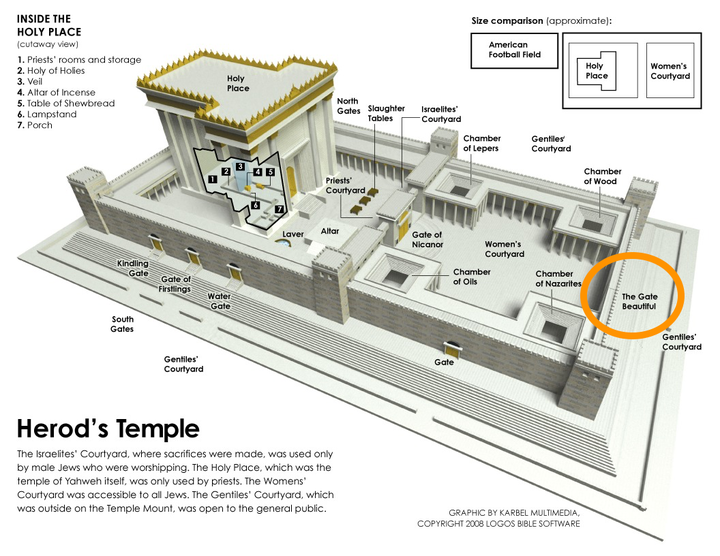 Jesus enters the courtyard speaking in scripture (the Pharisees would pick up on this)  He quotes Isaiah and Jeremiah as He purifies the temple.  They have made the Passover a time to make money by selling animals (telling the foreigners their sacrifices were not good enough) and selling other superstition items.  Read this in Isaiah 56: (it’s worth the time, I promise)

4 For this is what the Lord says:

“To the eunuchs who keep my Sabbaths,
who choose what pleases me
and hold fast to my covenant—
5 to them I will give within my temple and its walls
a memorial and a name
better than sons and daughters;
I will give them an everlasting name
that will endure forever.
6 And foreigners who bind themselves to the Lord
to minister to him,
to love the name of the Lord,
and to be his servants,
all who keep the Sabbath without desecrating it
and who hold fast to my covenant—
7 these I will bring to my holy mountain
and give them joy in my house of prayer.
Their burnt offerings and sacrifices
will be accepted on my altar;
for my house will be called
a house of prayer for all nations.”
8 The Sovereign Lord declares—
he who gathers the exiles of Israel:
“I will gather still others to them
besides those already gathered.”

9 “‘Will you steal and murder, commit adultery and perjury, burn incense to Baal and follow other gods you have not known, 10 and then come and stand before me in this house, which bears my Name, and say, “We are safe”—safe to do all these detestable things? 11 Has this house, which bears my Name, become a den of robbers to you? But I have been watching! declares the Lord.

18 Early in the morning, as Jesus was on his way back to the city, he was hungry.

19 Seeing a fig tree by the road, he went up to it but found nothing on it except leaves.

The questioning of authority:  They inquired about Jesus’ authority to drive out the moneychangers and merchants, heal the sick, and teach the people. They were the people with the authority to control what happened in the temple area.  They wanted to know “what authority” Jesus had, and “who” had given Him “this authority” to do what He did, since they had not.

Jesus answers a question with a question (this was customary in rabbinical debates).  He purposely references John the Baptist, his forerunner.  It is a lose-lose statement for the Pharisees.

The two sons- (notice both were referred to as sons-equal!  ouch)

This is the first time Jesus specifically points out that the parable is condemning the Jewish leaders.  (Their jaws must have dropped!)

The parable of the tenants

There are 6 main characters in this parable:

In my BIble, I literally crossed out the original in pencil and wrote the other

33 “Listen to another parable: There was God who planted Israel. He put a wall around it, dug a winepress in it and built a watchtower. Then God rented the Israel to some Jews and moved to another place. 34 When the harvest time approached, God sent his Prophets to the Jews to collect his fruit.

35 “The Jews seized his Prophets; they beat one, killed another, and stoned a third. 36 Then God sent other Prophets to them, more than the first time, and the Jews treated them the same way. 37 Last of all, he sent JESUS to them. ‘They will respect my , JESUS’ he said.

38 “But when the Jews saw tJESUS, they said to each other, ‘This is the heir. Come, let’s kill JESUS and take his inheritance.’ 39 So they took him and threw him Israel and killed him.

40 “Therefore, when God of the vineyard Israel comes, what will he do to those Jews?”

41 “He will bring those wretches to a wretched end,” they replied, “and he will rent  Israel to , the Gentiles who will give him his share of the crop at harvest time.”

42 Jesus said to them, “Have you never read in the Scriptures:  (Jesus says this when the scriptures specifically point to Him)

“‘The stone the builders rejected
has become the cornerstone;
the Lord has done this,
and it is marvelous in our eyes’?

43 “Therefore I tell you that the kingdom of God will be taken away from you and given to a people who will produce its fruit.44 Anyone who falls on this stone will be broken to pieces; anyone on whom it falls will be crushed.”

45 When the chief priests and the Pharisees heard Jesus’ parables, they knew he was talking about them. 46 They looked for a way to arrest him, but they were afraid of the crowd because the people held that he was a prophet.