We begin with the current events (read the overview from last night if you need help).

People: and their “name changes”

The names were changed to make them “Babylonian citizens” in their eyes,  as well as the eyes of the Babylonians since they were being trained to serve in the king’s palace.

Daniel challenged the chief official on their dietary needs (according to the Law in Leviticus 7 and 11).  They performed a 10 day test period and passed with flying colors. (what do flying colors mean anyway?)  Actually, they were healthier than those who ate the royal food.

20 In every matter of wisdom and understanding about which the king questioned them, he found them ten times better than all the magicians and enchanters in his whole kingdom.

21 And Daniel remained there until the first year of King Cyrus.

Wait!  We know that name from Isaiah!  King Cyrus!  The Persian who God uses to set the captives free!!

Chapter 2- The dream (that God put in his head).  He tells his magicians, enchanters, sorcerers, and astrologers not just to interpret the dream (anyone can make stuff up), but he says tell me what my dream was!  Uhhhh what??  Nebi knows their game of telling him what he wants to hear.  Long story short…(and this story reminded me of Joseph’s calling) God gives Daniel the dream and the interpretation.

31 “Your Majesty looked, and there before you stood a large statue—an enormous, dazzling statue, awesome in appearance. 32 The head of the statue was made of pure gold, its chest and arms of silver, its belly, and thighs of bronze, 33 its legs of iron, its feet partly of iron and partly of baked clay. 34 While you were watching, a rock was cut out, but not by human hands. It struck the statue on its feet of iron and clay and smashed them.

Here is the interpretation:  Each material will get stronger but less valuable. 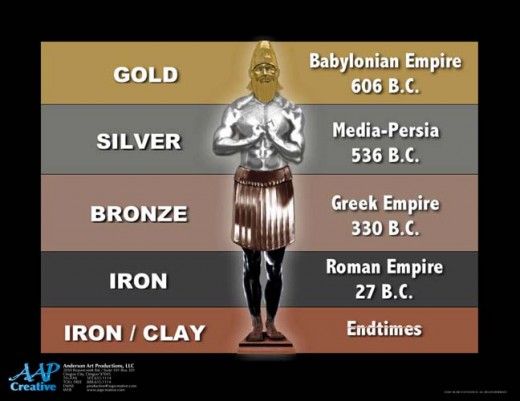 48 Then the king placed Daniel in a high position and lavished many gifts on him. He made him ruler over the entire province of Babylon and placed him in charge of all its wise men. 49 Moreover, at Daniel’s request, the king appointed Shadrach, Meshach, and Abednego administrators over the province of Babylon, while Daniel himself remained at the royal court.

Chapter 3-  Just when things were looking up, Nebuchadnezzar builds a statue made of all gold.  Ummm, did he “zone out” during the interpretation, or was his ego so big he didn’t believe he would fall to another nation.  (I think the latter) 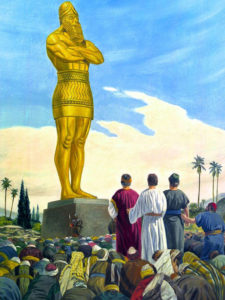 4 Then the herald loudly proclaimed, “Nations and peoples of every language, this is what you are commanded to do: 5 As soon as you hear the sound of the horn, flute, zither, lyre, harp, pipe and all kinds of music, you must fall down and worship the image of gold that King Nebuchadnezzar has set up. 6 Whoever does not fall down and worship will immediately be thrown into a blazing furnace.”

Shadrach, Meshach, and Abednego not only did not bow down, but they also said God will save them from the fire…and even if He chooses not to save us…we still won’t worship your false god or idol worship.  WOW!!!  Nebuchadnezzar ordered the furnace to be made SEVEN 😉 times hotter than usual.  So hot that even the guards that put the 3 men in were licked up by the flames. 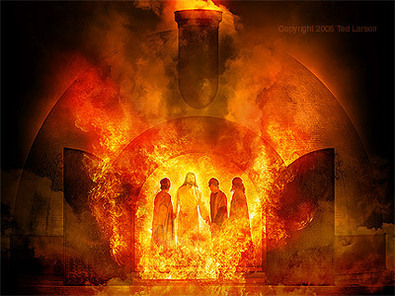 Word of the Day: Theophany: the appearance of God in human form.

I usually shy away from pointing them out, we have read several of them, but this one…this one is my favorite!

The ending is bittersweet.

28 Then Nebuchadnezzar said, “Praise be to the God of Shadrach, Meshach, and Abednego, who has sent his angel and rescued his servants! They trusted in him and defied the king’s command and were willing to give up their lives rather than serve or worship any god except their own God. 29 Therefore I decree that the people of any nation or language who say anything against the God of Shadrach, Meshach, and Abednego be cut into pieces and their houses are turned into piles of rubble, for no other god can save in this way.”

The first time I read it I loved it!

The second time I noticed what I underlined.