Chapter 4: Notice that Nebuchadnezzar wrote the first section.  He is the only gentile king that has any authorship in the Bible.  He tells the story of another dream.  He trusts Daniel and tells him the actual dream and waits for Daniel’s God to give him the interpretation. 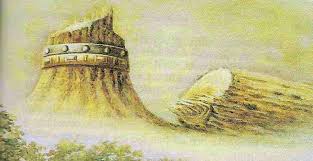 22 Your Majesty, you are that tree! You have become great and strong; your greatness has grown until it reaches the sky, and your dominion extends to distant parts of the earth.

23 “Your Majesty saw a holy one, a messenger, coming down from heaven and saying, ‘Cut down the tree and destroy it, but leave the stump, bound with iron and bronze, in the grass of the field, while its roots remain in the ground. Let him be drenched with the dew of heaven; let him live with the wild animals, until seven times pass by for him.’

The interpretation is the same as the statue.  BUT the last line is interesting!

25 You will be driven away from people and will live with the wild animals; you will eat grass like the ox and be drenched with the dew of heaven. Seven times will pass by for you until you acknowledge that the Most High is sovereign over all kingdoms on earth and gives them to anyone he wishes. 26

34 At the end of that time, I, Nebuchadnezzar, raised my eyes toward heaven, and my sanity was restored. Then I praised the Most High; I honored and glorified him who lives forever….

37 Now I, Nebuchadnezzar, praise and exalt and glorify the King of heaven, because everything he does is right and all his ways are just. And those who walk in pride he is able to humble.

If only his son listened to him that day!!

Chapter 5.  The writing is on the wall!  Literally!!

King Belshazzar is Nebuchadnezzar’s son.  He was heir to the throne.  He was having a party since he is now the new king and instead of Red Solo Cups…he is using the items stolen from the Holy Temple!  😡  Suddenly:

25 “This is the inscription that was written:

26 “Here is what these words mean:

Mene]: God has numbered the days of your reign and brought it to an end.

27 Tekel: You have been weighed on the scales and found wanting.

28 Peres]: Your kingdom is divided and given to the Medes and Persians.”

That night History will tell us that as they were reading the writing on the Wall, Darius was already stopping up the water ducts and entering the palace.

The famous chapter 6.  Many of you know this story from your childhood, but there might be more than one of you today actually reading the real version in its context, chronologically for the first time.  So Enjoy every word.

28 So Daniel prospered during the reign of Darius and the reign of Cyrus the Persian.  (Think of the arms of the statue dream).