When Nebuchadnezzar’s son became king, he had a dream that mirrored his father’s dream.  The beasts match the statue. 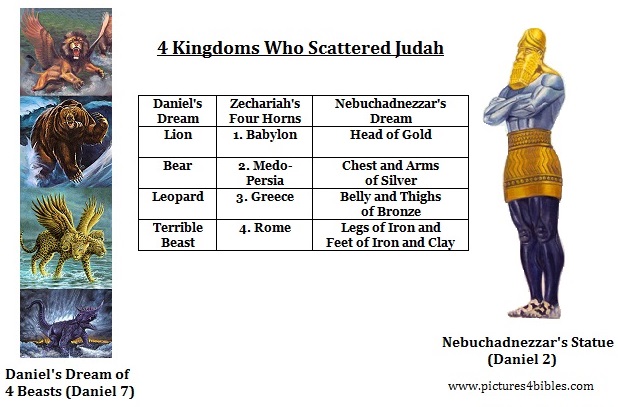 Chapter 8  Stay with me….each dream is a layer on top of the last dream, giving more details.  The next dream talks about the goat and the ram.  Look below.

This is one of those weird posts you might need to read twice to absorb,

Chapter 8 us a prophecy that will occur in the future (BUT is now in our History).  This was fulfilled during the 400 years between the Old Testament and the New Testament.  I am not kidding!!

19 He said: “I am going to tell you what will happen later in the time of wrath, because the vision concerns the appointed time of the end. 20 The two-horned ram that you saw represents the kings of Media and Persia. 21 The shaggy goat is the king of Greece, and the large horn between its eyes is the first king. 22 The four horns that replaced the one that was broken off represent four kingdoms that will emerge from his nation but will not have the same power.

Let’s make sure we understand.

Here is a quick glimpse.  After the captivity, the temple will be rebuilt and a man named Alexander (the Great) will conquer the ENTIRE area.  He will die and 4 greedy generals hatch a plan (fun word to say….hatch 🤪).  They subdivide the area into 4 governing areas.  (See, Alexander’s wife was pregnant when he died so they said, “we will do this until the heir of the throne is of age”. (big fat liars they were).  Well, the 4 generals were ”power-hungry” and eventually killed the child, the mother, and Alex’s brother. 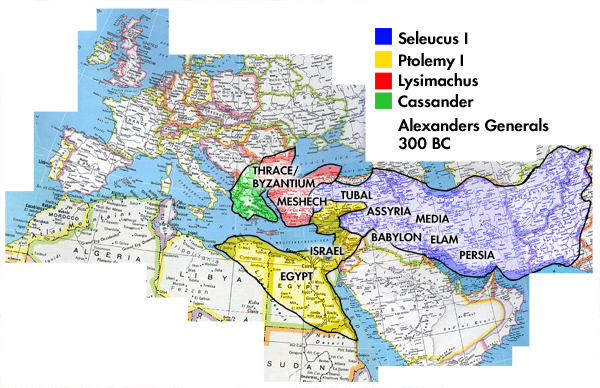 9 Out of one of them came another horn, which started small but grew in power to the south and to the east and toward the Beautiful Land. 10 It grew until it reached the host of the heavens, and it threw some of the starry host down to the earth and trampled on them. 11 It set itself up to be as great as the commander of the army of the Lord; it took away the daily sacrifice from the Lord, and his sanctuary was thrown down. 12 Because of rebellion, the Lord’s people and the daily sacrifice were given over to it. It prospered in everything it did, and truth was thrown to the ground.

Go back to the small map above.  See the 4 Generals.  There was a civil war between these idiots and it really came down to 2 of them…(Seleucid sand the Ptolemy).  The 8th king of the Seleucids, a man named Antiochus IV “prince of princes” grows in power.  He is a prototype of the Antichrist.  Antiochus is to the Jews what the Antichrist will be for us to come. (analogy if you are an English teacher)

How bad was Antiochus?? I will give you the top 10:

23 “In the latter part of their reign, when rebels have become completely wicked, a fierce-looking king, a master of intrigue, will arise. 24 He will become very strong, but not by his own power. He will cause astounding devastation and will succeed in whatever he does. He will destroy those who are mighty, the holy people. 25 He will cause deceit to prosper, and he will consider himself superior. When they feel secure, he will destroy many and take his stand against the Prince of princes. Yet he will be destroyed, but not by human power.

How does Antiochus fall??  Who will God raise up?? Ever hear of the Maccabees? (not the soccer team, the family)

I am keeping this SUPER SUPER light like we are on a tour bus driving by a house.  God has a stopwatch in his hand.  He has Seventy periods of 7.  One for each Sabbath missed during the Captivity.  The clock started ticking when the Decree to rebuilt the temple started.  The stopwatch stopped (in God’s hand the week of the Crucifixion).  When Jesus comes again the stopwatch will start again and the next period of 7 will start.

I hope this helps.  If these 3 chapters were clear as mud, when we end the Old Testament it will all make sense.