Chapter 19 starts mid-story with David finding out Absolom has been killed.  Although David’s response is understandable as a father, he ignored his responsibility to the ones that put their lives on the line for him.  Joab gives him a reality check because he feared if David continued mourning him publically he would lose his supporters as King. Joab was really being selfish because if David loses rank it will affect Joab’s high position.   Even though the rebellion started in Judah, by naming Amasa the new commander, it brought peace back into Judah.

You may have picked that the Hebrews are referred to as one of two categories.   Think of it as North and the South.  Eventually, the kingdom will divide in TWO, the two sides will be named Judah and Israel.  This book was written later in history so the writer refers to them as Judah OR Israel.  (We are not divided yet, but we are getting there soon) 😢. This is what it WILL look like: 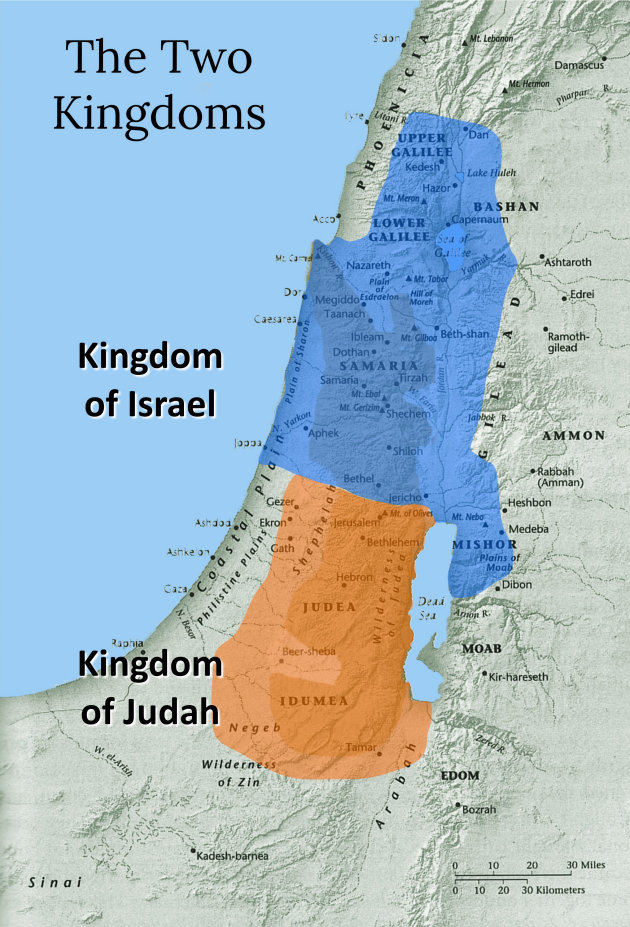 As we read, we can see seeds that the nation is already dividing.  The split between David and Absolom is a major event that truly never healed and it is obvious that David favors the South.

In chapter 19 a man named Shimei asked for forgiveness.  He was the guy who threw rocks at David in chapter 16!  David sees Saul’s grandson (Jonathon’s son) Mephibosheth who admits his servant lied to David; David acts kindly and splits Saul’s estate anyway.

Notice that it specifically says Sheba was a Benjaminite, so you have to ask yourself…does that matter?  Yes.  Saul was a Benjaminite so we are still seeing the ripple effect in the tribes from when Saul lost his kingship.  There is a phrase in chapter 20 that I picked up on several times “Joab’s men”. Wasn’t it David’s men??  Take note to these small details as you read.  David’s lack of decisive leadership has caused men to be faithful to Joab so much so that they are referred to as “Joab’s men”.

“A man named Sheba son of Bikri, from the hill country of Ephraim has lifted up his hand against the king, against David. “Hand over this one man, and I’ll withdraw from the city.”

The woman said to Joab, “His head will be thrown to you from the wall.”  You go girl!  (I added that last part)

Then the woman went to all the people with her wise advice, and they cut off the head of Sheba son of Bikri and threw it to Joab. So he sounded the trumpet, and his men dispersed from the city, each returning to his home. And Joab went back to the king in Jerusalem.

I could hang with this woman!

Chapter 21-  We begin the LAST four chapters of 2 Samuel.  The last 4 chapters are like an appendix and not in chronological order.  (Arggg, that makes it tough for us) So if it all made sense to you, you can stop reading here.  Otherwise, I will recap some of this if you were as confused as I was this morning.

In these chapters, there are 2 incidents describing God’s wrath against Israel mixed in with some victories of David.  We will read one of them today.

Remember David will ALWAYS keep his covenant with Jonathon so his son Mephibosheth is spared.  The seven were put to death in April (how do I know? It’s Barley season baby) and the LINE OF SAUL IS WIPED OUT!  YIKES!

Normally the dead were buried quickly but not in this case.  The bodies were exposed until God lifted the famine and rain fell.  Then respectfully, the bodies were all gathered as a family and buried with Saul and Jonathon.

verse 15-22 is a series of battles between the Philistines and the Israelites (not necessarily in chronological order).

I found this reading complicated.  Maybe it’s just me.  😉 We are rounding the corner to introduce Solomon and some major historical events!  Hang in there.