This map might help you follow the reading.  We know the Philistines control the south region, mainly Judah,  but now they are extending north.  The Tabernacle is in Shiloh.  The Phiipstines control 5 major cities-

As the Israelites get defeated they decide to bring the Ark of the Covenant like a “good luck charm”.  We really need you to stop and think about the scene on a personal level.

ONLY 1 day of the whole year (the Day of Atonement) the Hight Priest would go behind the curtain in the tabernacle to make an atonement for all the people. God is HOLY!  HERE we have “scoundrels” Hophni and Phineas with the ark bringing it into the battle scene.  As if God is a genie in a bottle…”ok come out and fight now”.  Good grief!

The ark is captured, the prophecy of Hophni, Phineas and Eli are fulfilled from yesterday’s reading.

(it wasn’t the death of his sons that made him fall back in despair, it was the capturing of the ark ❤️)

If you have any interest in following the Priestly line, feel free to print this.  Remember High Priests only come from Aaron’s line. (It reads from the bottom up).  Click here.

Chapter 5: Use the map above to follow the Ark. It is then placed in the pagan temple next to their head god (no pun intended), Dagon.😂. I am a little unglued about this scene.  Our Holy God is set in a pagan temple. 😢😢😢.  How far have they fallen! Dagon was the chief deity of the Philistines.   According to ancient mythology, Dagon was the father of Baal. He was the fish god (dag in Hebrew means “fish”), and he was represented as a half-man, half-fish creature.  Dagon may also have been the provider of grain. So Dagon was similar to many other idols in that he personified natural forces that had supposedly produced all things. Dagon is brought to humiliation by the True God of the Israelites. Chapter 6: Meanwhile, the Lord is afflicting the people in the cities with tumors, diseases carried by rats, and death through Ashdod, Gath,  and Ekron.  So let me ask you: if any of their gods are so great…why don’t they help!  They KNOW that LORD is stronger and they want to return their stolen property. To ensure that it is received they send it with gold gifts.  The implications of the cows’  actions would have been obvious to the Philistines that the Israelite God had indeed been inflicting them.  They travel to Beth Shemesh,  a town of Priests (Josh 21:16) who can take the Ark off their hands.

BUT the people in Beth Shemesh (so fun to say) “peek” inside the Tabernacle and 70 people drop dead (as warned in Numbers 4:5).  Distraught at the death of these men they follow the example of the Philistines and send it to Kiriath Jearim to stay in Abinadab’s house. Imagine if someone knocked on your door and said can you watch this for me!  NOW put in your head Kiriath Jearim.  The ark will stay here UNTIL the Lord chooses the place for it’s final rest. 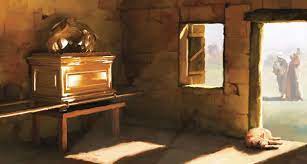 Chapter 7.  Finally, a Judge calls them to repentance and the Israelites rid themselves of the chief pagan gods:  Baals and Ashtoreths.  NOW the Philistines were subdued (not permanently).

4 So all the elders of Israel gathered together and came to Samuel at Ramah. 5 They said to him, “You are old, and your sons do not follow your ways; now appoint a king to lead us, such as all the other nations have.”

Verse 9 God says “warn them before we go forward with their plan”.  So Samuel warns them!

So after that speech…the people say “We want to be like everyone else…we will take it!!”

Finally,  in verse 21 the Lord says to Samuel “Listen to them and give them a king”.

Buckle up kids!! We are about to be a Monarchy with the 1st king.