The Israelites were given instructions to destroy the Canaanites and take possession of their land.  Israel begins by asking the Lord which tribe should lead the way, and Judah is chosen.  Judah naturally asks the Simeonites to join them since Judah is allowing them to live in their land (Simeon lost his right to own land when he plotted vengeance on the Shechamites after they tricked them into getting circumcised and then attacking them) (click here if you want to re-read Genesis 34)

Bezek is in the region of Manasseh.

(Put this name in your pocket for a short time:13 Othniel son of Kenaz, Caleb’s younger brother, took it; so Caleb gave his daughter Aksah to him in marriage.)

Chapter 2:The angel of the Lord  (a theophany) 😁 went up from Gilgal to Bokim and said, “I brought you up out of Egypt and led you into the land I swore to give to your ancestors. I said, ‘I will never break my covenant with you, and you shall not make a covenant with the people of this land, but you shall break down their altars.’ Yet you have disobeyed me. Why have you done this? And I have also said, ‘I will not drive them out before you; they will become traps for you, and their gods will become snares to you.”

Unfortunately Yes.  Yes, they will!

The next generation of Israelites now grows up who did not know the Lord nor the might acts he had don’t for their parents in battles (2:10).  Remember the “Shema” verse in Deuteronomy 6:

Well, they ignored this too.

Look at the cycle the  Israelites are in: 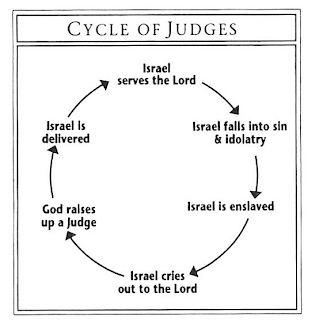 If you read in a Bible rather than on-line, go back and underline the cycle in the second half of Chapter 2.  You will see it.

This became a cyclical pattern BECAUSE their crying out was not an act of repentance, simply a cry for help (wrestle with that application in your own life, I do that ALL the time)  Look at verse 19: when the judge died, the people returned to the ways even MORE corrupt than those of their ancestors.

Now you get it.

20: Therefore the Lord was very angry with Israel and said, “Because this nation has violated the covenant I ordained for their ancestors and has not listened to me, 21 I will no longer drive out before them any of the nations Joshua left when he died. 22 I will use them to test Israel and see whether they will keep the way of the Lord and walk in it as their ancestors did.” 23 The Lord had allowed those nations to remain; he did not drive them out at once by giving them into the hands of Joshua.

So now begins the cycle.