Spot 13 is Edom from yesterday.
So now look at 14 and 15.   That is where we are.  It is important to see it so that when we cross the Jordan River and divide land “Trans-Jordan” you will totally get it. In the Gospel, John was speaking to Nicodemus; a Pharisee and a member of the Sanhedrin.  If you do not know who they are,  just know that he was a legalistic important Jewish man that was raised under the Law (as a way of Salvation).  He is questioning Jesus about how a person would get to Heaven.  Jesus knows he needs to speak his “lingo”, so he references a story from the Torah (the 1st 5 books), I am sure Nicodemus has memorized.  The Bronze Snake:

Just as Moses lifted up the snake in the wilderness, so the Son of Man must be lifted up, that everyone who believes may have eternal life in him.”

Ready for something cool:  The universal healing symbol on an ambulance.  This will remind you to pray for healing for that person.  Also, what a wonderful opportunity to share the Gospel if you are in the car with someone and see this symbol.  This is how it looks in my car: “See that symbol, do you have a phone on you, google Numbers 21 and John 3….” it is the coolest conversation!

21:10 forward.  They are back on track following the way the Lord directs.  So refer to your maps, they are coming up on the east side of the Jordan River.  “Trans-Jordan”.  You are going to hear that phrase a lot, so put it in your pocket!.  The Israelites want to pass through peacefully, but when the Amorites refuse, the Israelites battle them.  Flag on the field!  Look at verse 25: Israelites captured ALL the cities of the Amorites.  This was a huge victory for this new generation.  God was giving them the confidence that if they follow HIM and trust HIM when they enter the Promised Land, there was nothing to be afraid of!!  Their god- Chemosh- in verse 29, gave them up as fugitives!

The strongest armies are hearing about the reputation of these Israelites because of their God!  So Balak, a Moabite King,  allies with the Midianites,  and hires a sorcerer named Balaam to put a curse on the Israelites. (Look on your genealogies if you want to remember who Moab/Midian are).

The story starts out pretty straightforward and then takes a turn at verse 21.  God told him to GO with them, so he went.  Then God is mad at him??  What?  Read it closely.

20 That night God came to Balaam and said, “Since these men have come to summon you, go with them, but do only what I tell you.”

21 Balaam got up in the morning, saddled his donkey and went with the Moabite officials. 22 But God was very angry when he went, and the angel of the Lord stood in the road to oppose him. Balaam was riding on his donkey, and his two servants were with him.

2 Peter 2:15- They have left the straight way and wandered off to follow the way of Balaam son of Bezer,who loved the wages of wickedness.

So the reading ends mid-story?  I am not sure why BUT I am thinking that God wants me to ponder why I can’t see Him when He is right in front of my face!  Why do I wait till He forces me to be in a tight spot before I look up!   Here is your visual for today: 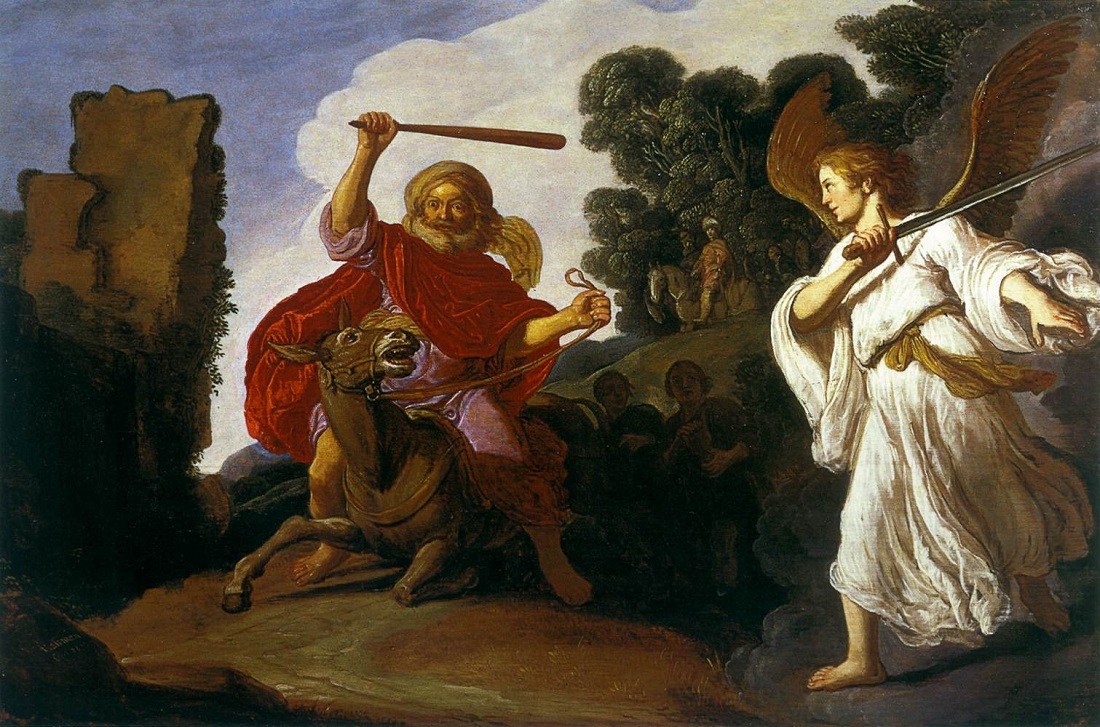