If you are feeling “lost” on Isaiah.  I posted a “recap” video yesterday.  Scroll down to it, it might help.

Chapter 35- let’s look ahead to Revelation

After the Kingdom divided we have:

Israel is captured by Assyria

Judah will be captured by Babylon (in 150 years)  Only Judah will survive and come back to Jerusalem because there is a covenant God must honor that He will bring a King through David’s Genealogy. 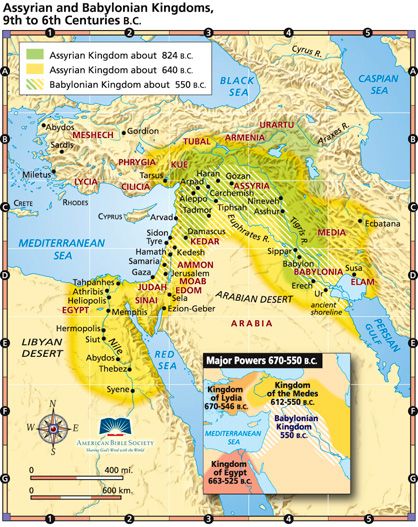 If you look at this map you will see Assyria is a major world power.  The King of Assyria is Sennacherib.

(The King of Judah is Hezekiah.  He was the really good king that restored the Temple!)

The other world power is Egypt.  Well, Israel is stuck in the middle.  So if world powers are going to attack each other….Israel best call on the Lord for help, right?

So when the Assyrian Kings went to Judah they gave a speech in verses 4-10.  In summary they said…There is no deliverance in the Lord!  Teaming up with Egypt won’t save you.  You need to surrender to us because Assyria had the authority from God to attack Jerusalem. “The Lord himself told me to march against this country and destroy it.’”

The Assyrian army even said, “C’mon fellas…we will even give you 2000 horses”.  They instructed them to speak Aramaic so that everyone listening would understand what they were saying, even the people on the wall.  Instead, the Assyrians address them in Hebrew making sure they can understand:

I am unglued over this!

So now what happen???

It is also rerecorded on a clay prism that was found in 1830 in Nineveh, dating to 701 BC