Seven days later they had walked from Caesarea Philippi to Mt. Tabor (possibly). 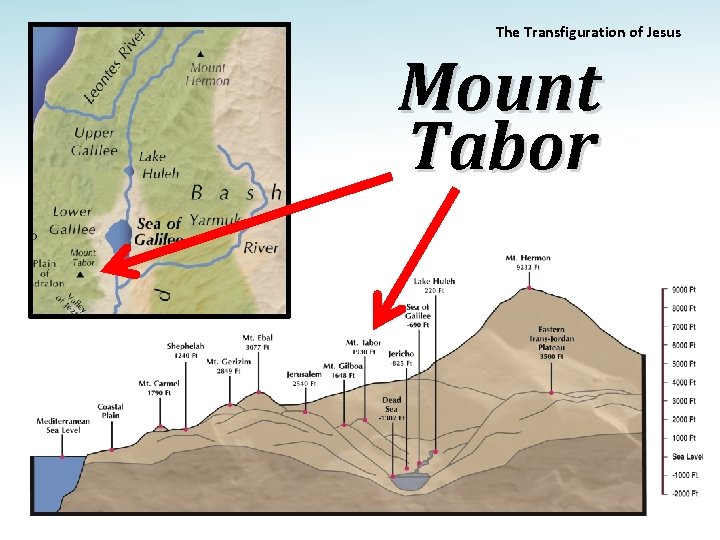 About a week after Jesus told His disciples that He would suffer, die, and be raised to life, He took Peter, James, and John up a mountain to pray.  We talked about the disciples and their faith last week. They had faith but they always had some doubt in his power and authority.  Jesus took them aside to show them He was the son of the living God! He was God in the flesh.  I picture it like He “unzipped” his skin to show them that He was fully man but fully God too! 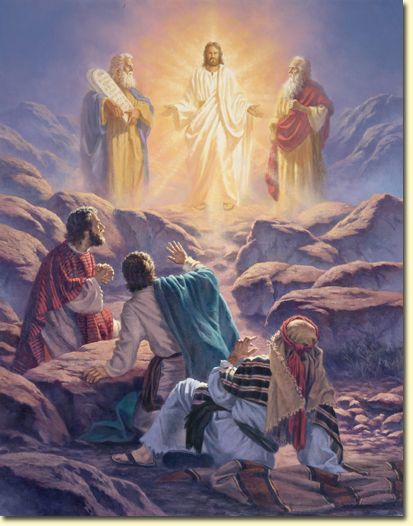 Peter, not knowing what he was saying fully (easy for us, we have hindsight 20/20) and being very fearful, offered to put up three shelters for them. This is a reference to the booths that were used to celebrate the Feast of Tabernacles when the Israelites dwelt in booths for 7 days. Peter was expressing a wish to stay in that place.

The appearance of Moses and Elijah represented the Law (Moses) and the Prophets (Elijah). But God’s voice from heaven – “Listen to Him!” – clearly showed that the Law and the Prophets must give way to Jesus. The One who is the new and living way is replacing the old – He is the fulfillment of the Law and the countless prophecies in the Old Testament. Also, in His glorified form, they saw a preview of His coming glorification and enthronement as King of kings and Lord of lords.

The disciples never forgot what happened that day on the mountain and no doubt this was intended.  In 2 Peter 1, he wrote:

16 For we did not follow cleverly devised stories when we told you about the coming of our Lord Jesus Christ in power, but we were eyewitnesses of his majesty. 17 He received honor and glory from God the Father when the voice came to him from the Majestic Glory, saying, “This is my Son, whom I love; with him I am well pleased.” 18 We ourselves heard this voice that came from heaven when we were with him on the sacred mountain.

16 I brought him to your disciples, but they could not heal him.”

These men were given healing powers!    (Here is a scripture directed to the disciples that I think many of us take ut of context)

20 He replied, “Because you have so little faith. Truly I tell you, if you have faith as small as a mustard seed, you can say to this mountain, ‘Move from here to there,’ and it will move. Nothing will be impossible for you.”

In Mark, it ends 29 He replied, “This kind can come out only by prayer.”

The disciples could not heal him because they thought “they” could heal him.  No, they need to come to God, so that the healing was from Him, for His Glory.

Temple Tax:  Oh I love this!  So temple tax was to be paid yearly (about 2 days wages) every year for Temple maintenance.  When Kings collected taxes their children were exempt from paying it.  So SHOULD Jesus be required to pay it?  NO, He was the son of God.  But does He?  YES.    Jesus did not come to break the Law, not a single one.  As Christ-followers, in His family, are we REQUIRED to give?  NO, should we? YES.  When we do, God is faithful to provide it.

Luke: We have an extra story that says:

51 As the time approached for him to be taken up to heaven, Jesus resolutely set out for Jerusalem. 52 And he sent messengers on ahead, who went into a Samaritan village to get things ready for him; 53 but the people there did not welcome him, because he was heading for Jerusalem. 54 When the disciples James and John saw this, they asked, “Lord, do you want us to call fire down from heaven to destroy them?” 55 But Jesus turned and rebuked them. 56 Then he and his disciples went to another village.

BUT this is the very reason God chose them to be in the inner circle.  The spirit would be needed for the mission ahead.  James will be the first disciple to lose his life for the Lord, and John will be the last.