Jesus changes water into wine- We could talk about the details that prove this miracle: the pots were stone not red clay,  or that they were filled to the rim beforehand but instead let’s talk about Jesus’ role.  We know that Mary has known her whole life who her son is   -virgin conception, her visit with Elizabeth, the Sheppards, the Magi BUT she also knows Jesus knows who HE is.  When He was 12 and stayed at the temple he said “I am at my Father’s House”.    Maybe Mary feels this is the time…why??  ALL of her friends are there to witness that she didn’t lie and that she was really a virgin (maybe). But Jesus says:

However, we now have a change in role here.  The word “woman” is a sign of respect-like “Ma’am”. I am sure Jesus has obeyed Mary up to this point (it’s in the Law).  But the role change here is now “What does The Father want” This is the moment he shows the world a miracle.

11 What Jesus did here in Cana of Galilee was the first of the signs through which he revealed his glory; and his disciples believed in him.

Pilgrimages to the Temple were the equivalent of our “Black Friday”.  People would come from all over to bring a sacrifice.  However, when they brought their animal or money the businessmen or priests would tell them “Sorry, I see a blemish on that animal, you need to buy one of ours” or they would need to make an offering with a special coin they would sell.  When Jesus turned the tables over the Jews asked for a sign of His authority.   He responded:

18 The Jews then responded to him, “What sign can you show us to prove your authority to do all this?”

19 Jesus answered them, “Destroy this temple, and I will raise it again in three days.”

We know that this is a play on words, BUT after Jesus’ resurrection, it all makes sense to them. 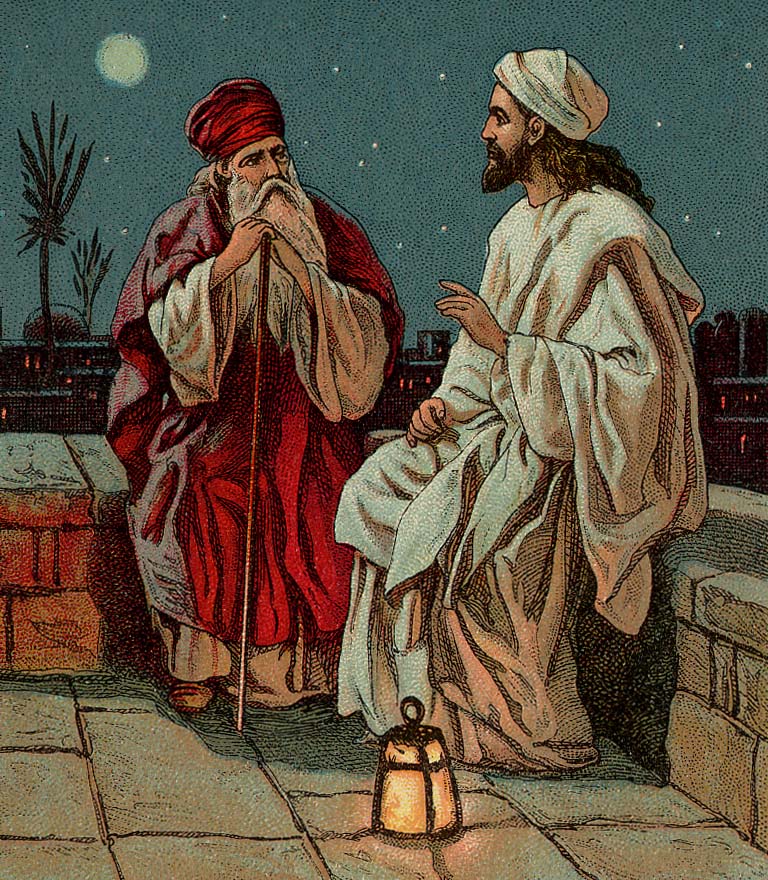 Chapter 3 Let’s back this up.  Back in Numbers 11, God told Moses to make a council to support his mission.

16 The Lord said to Moses: “Bring me seventy of Israel’s elders who are known to you as leaders and officials among the people. Have them come to the tent of meeting, that they may stand there with you.

2000 years later a group of men called the Sanhedrin was a council that took this role.  Think of them as the Supreme Court and the Senate to the Jews.  Unfortunately, they believed their salvation lay in “works” and “genealogy”.  Nicodemus is one of the top leaders of the Sanhedrin.  He must have been watching Jesus for some time and visited him at night.  This could be for 2 reasons:

Jesus speaks to Nicodemus about the reality of being “born-again”.  Being born (once) into the genealogy of Abraham and David is not enough (referred to as being born through the water in a mother’s womb).  But one must also be born (again) by the Spirit.  Jesus continues with…this should NOT surprise you!  You have been studying the scriptures your whole life Nico!

14 Just as Moses lifted up the snake in the wilderness, so the Son of Man must be lifted up, 15 that everyone who believes may have eternal life in him.”

Jesus tells a story that will make sense to Nicodemus.  When the Israelites were in the wilderness for 40 years they sinned: They spoke against God and Moses.  What is the penalty for sin? death.   How can one be saved? Believing.  SO Jesus recalls this story of history for Nicodemus BEFORE correlating 3:16 to him SO THAT he would understand.

4 They traveled from Mount Hor along the route to the Red Sea, to go around Edom. But the people grew impatient on the way; 5 they spoke against God and against Moses, and said, “Why have you brought us up out of Egypt to die in the wilderness? There is no bread! There is no water! And we detest this miserable food!”  (The Sin)

6 Then the Lord sent venomous snakes among them; they bit the people and many Israelites died. 7 The people came to Moses and said, “We sinned when we spoke against the Lord and against you. Pray that the Lord will take the snakes away from us.” So Moses prayed for the people. (The penalty of death)  Did God condemn them or save them?

SO NOW we can get to verse 16 as it was spoken to Nicodemus.  Without 14-15 it  would not have made sense because verse 16 has not happened yet (in Nico’s time) BUT he will be an eye witness when it does-and he reacts!  Jesus is setting up what he WILL see soon, BUT Nicidemous shouldn’t need to see it to understand “Faith”,  if he read Numbers 21!

16 For God so loved the world that he gave his one and only Son, that whoever believes in him shall not perish but have eternal life. 17 For God did not send his Son into the world to condemn the world, but to save the world through him.

After this, we jump back in the timeline and discuss again how the people were following John the Baptist still rather than following Jesus.   Of all the awesome things John says (not the author of this book, Jesus’ cousin,  John) my favorite verse is:

This scripture has punched me in the stomach more times than I can count.

Jesus was going from Judea to Galilee.  Well, for 700 years there has been animosity between the Jews and the Samaritans.  During the Assyrian captivity in 722 BC the poor Israelites were not taken into captivity. In the meantime, tons of gentiles from enemy nations moved in.  They intermarried.  Well, do you remember during the time of Ezra some people came and gave them a hard time…those were the Samaritans.   So they typically went from Jerusalem across the Jordan River, through Perea, back over the Jordan to Galilee.  (That might help put some depth to this read)

Look at verse 4: Now he had to go through Samaria.

If I start typing on this story, this post would be double the size.  Ask questions in the comments.  Seriously.

48 “Unless you people see signs and wonders,” Jesus told him, “you will never believe.”

I used to read that in my head and think Jesus was frustrated.  “Ugggg  why do I need to prove to you people….”  But I am researching a little more of the miracles healings and for me this year,  I am not hearing that “tone” (for me). I hear the opposite.    “I must do signs and wonders SO THAT when I share my words you believe me.”

Think about that as you serve people.  How are you serving the unbelievers SO THAT when you share words they believe you.