5 Now when Jesus saw the crowds, he went up on a mountainside and sat down. His disciples came to him, 2 and he began to teach them. 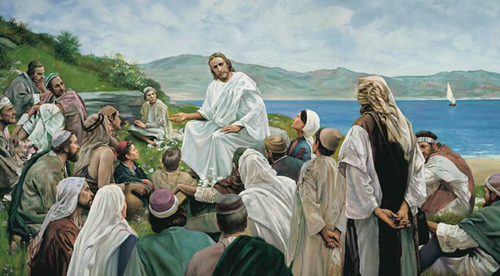 So we call this the Sermon on the Mount because of the landscape.  Jesus would speak to the 12 but because the sea was recessed, the mountains would act as a microphone (echo) and the crowds would hear His every word.

Matthew 5-The Beatitudes are the eight declarations of blessedness spoken by Jesus at the beginning of the Sermon on the Mount (Matthew 5:3-12), each beginning with “Blessed are…” The Greek word translated “blessed” means “happy, or blissful” In the Sermon on the Mount, Jesus uses the word to refer to more than superficial happiness that only He can give.

The first 4 blessings are reversals that will happen with the arrival of God’s reign.

The next 4 blessings speak to those who live according to the Law.

Wait!  I know what you are thinking: the Law is the Old Testament. Jesus fulfilled the Law. The Book of the Law consisted of 3 parts: ceremonial, moral, and civil law.   After the crucifixion, the ceremonial law is fulfilled.  However, the New Testament actually expands the moral and civil law for believers through Jesus’ teachings such as this.  He raises the bar even higher!  Read 17 (below again).  I get very concerned that people hear “Jesus fulfilled the Law” as a Willy Wonka ticket to “try your best” to live according to the scriptures but it’s ok if we don’t.

The Fulfillment of the Law

17 “Do not think that I have come to abolish the Law or the Prophets; I have not come to abolish them but to fulfill them. 18 For truly I tell you, until heaven and earth disappear, not the smallest letter, not the least stroke of a pen, will by any means disappear from the Law until everything is accomplished. 19 Therefore anyone who sets aside one of the least of these commands and teaches others accordingly will be called least in the kingdom of heaven, but whoever practices and teaches these commands will be called great in the kingdom of heaven. 20 For I tell you that unless your righteousness surpasses that of the Pharisees and the teachers of the law, you will certainly not enter the kingdom of heaven.

Read Chapter 5 and in the comments talk about at least one verse that fell new on you or caught your eye (no pun intended for verse 38).  Feel free to write 10 comments.  IF none did, then pray the Lord to open your ears to hear and your eyes to see and try again.  When you read these you will notice the Sermon on the Mount is the great equalizer.  Example: murder or calling someone “Raca”-fool (we do this when we are self-righteous and may not have all the facts first when you call someone a fool-gasp!!).  Both are a sin.  Sin is Sin-it separates you from the Lord.  (Consequences may vary) But each sin is still a brick in the wall between you and God.

Before I go- just in case we have some first-time readers…and DON’T laugh at me…It is called the Bee AAA ta tudes.  I called it the Booo ti tudes. (Ummm phonetically it looks like Beautiful).

Have a wonderful day:  Read slowly today!  Re-read maybe more than once.  Be changed.  Would love a comment or 2 today. 😉