2 Kings 5 is one of my new favorites.  Naaman is a commander to the king of Aram.  You can see on this map that it is a growing nation that threatens Israel.  BUT God does not discriminate. 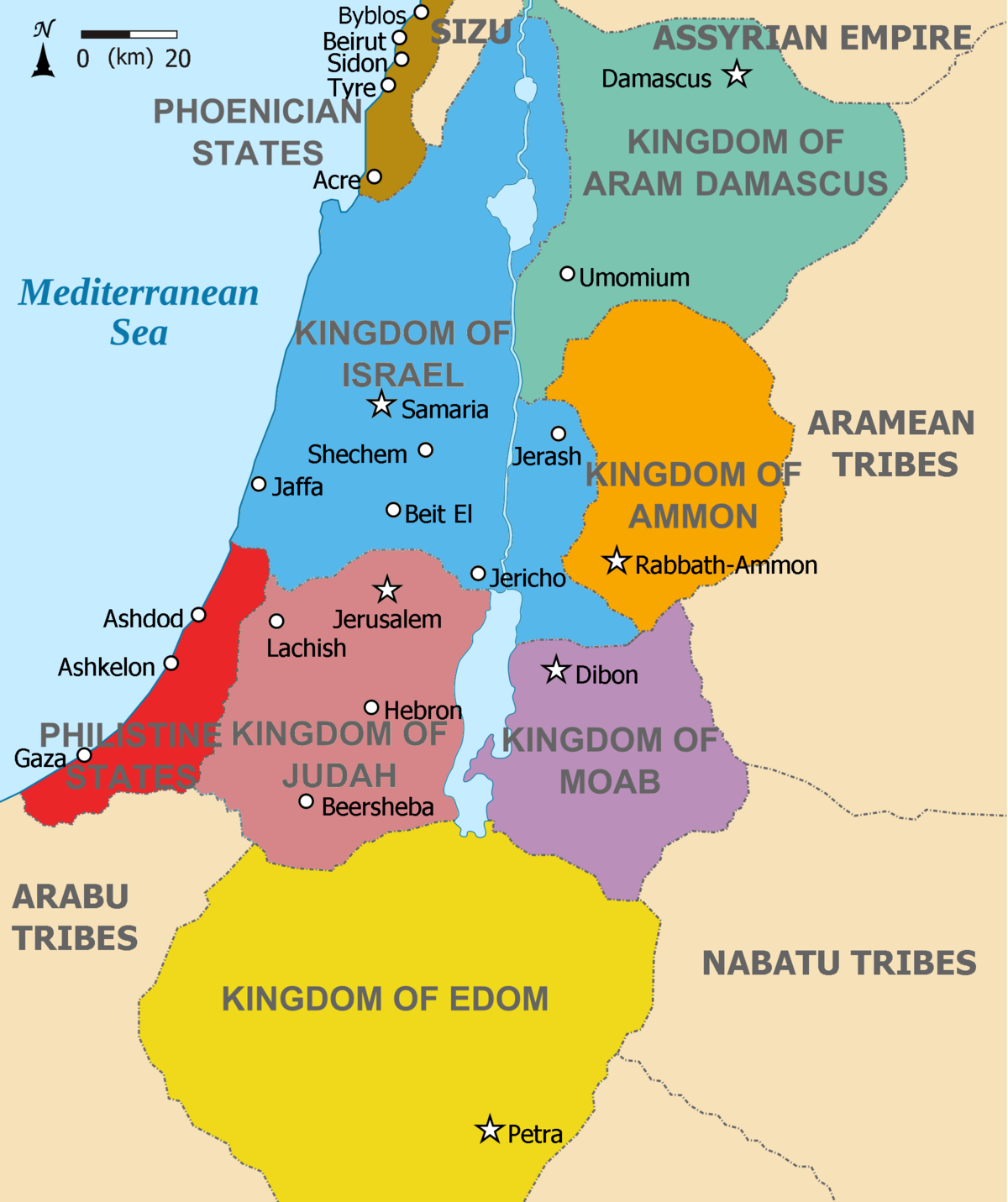 The faith of the Israelite slave girl contrasts with the free people of Israel and the kings who worshipped false gods. Naaman is an important guy in his nation.  First, the fact that Elisha sent a mere messenger to greet him got his britches in a twist.  THEN to tell him to wash in the Jordan River….the river the servants use??   Oh, the humanity!   He is a “somebody”.  Ohhhh the sermon I can make out of this story!  I have seen so many times people who think jobs are beneath them!  How often do we see people at church or at work that need the spotlight (the glory).   To do the servant’s work is beneath them because they have arrived, they are a Naaman! Moving on…

So the “enemy” of Israel declared there is only one true God- This is a salvation story!  Yet, the man who served Elisha: Gehazi-chose MONEY as his God!

Chapter 6-The axhead.  This story is a “folktale” among the Jewish people.  How God can raise up or lift up the most sunken heart.  We can read it as the Israelites are the axhead, they were once the instrument God used and they have flung off the handle and are not useable to Him (Penny, I know you like this visual).  Not true, we will see God raise them back up to be used again. (I have seen many people fall deep away from the Lord and they too were restored)

Elisha traps blinded Arameans- (I feel like I am reading New Testament parables today)- Read this story and then think back to this Proverb:

If your enemy is hungry, give him food to eat;
if he is thirsty, give him water to drink.
In doing this, you will heap burning coals on his head,
and the Lord will reward you.

Famine in Samaria- Let’s break this crazy story down.  First, let’s start with the prophecy of this happening: In Deuteronomy 28 Moses gave a warning for disobedience as they enter the Promised Land:  If you would like to read the whole thing click here.  However, in reference to the cannibalism, we read today here is the verse:

53 Because of the suffering your enemy will inflict on you during the siege, you will eat the fruit of the womb, the flesh of the sons and daughters the Lord your God has given you.

So the cliff note version is: The king of Aram is attacking Samaria (the Northern tribes: Israel).  Well, because Israel has fallen so far from the Lord, He has brought a huge famine on them. They are trapped in their hunger because they cannot leave the city walls since they are surrounded by the army of Aram.  Does the king of Israel take ownership of the dilemma they are in?  Heck no!  He blames Elisha probably for not killing the Arams in the last chapter but instead feeding them!

Chapter 7 continues the story but starts with a very powerful statement and prophecy:

Elisha replied, “Hear the word of the Lord. This is what the Lord says: About this time tomorrow, a seah of the finest flour will sell for a shekel and two seats  of barley for a shekel at the gate of Samaria.”

2 The officer on whose arm the king was leaning said to the man of God, “Look, even if the Lord should open the floodgates of the heavens, could this happen?”

“You will see it with your own eyes,” answered Elisha, “but you will not eat any of it!”

I have talked about this topic before..Is anything too big for God?  I can tell you I am the officer in this story with a lack of faith.  My father and my brother are atheists.  My mother is a non-practicing catholic BUT because she participated in the sacraments she feels she has the “fire insurance”.  When I pray for my family I know God can do the impossible BUT my family is SO LOST that when I get done praying I think “ even if the Lord should open the floodgates of the heavens, could this happen?  No, because they will NEVER CHANGE!”  I am the officer!!

Well, this story is proof that I am wrong. Even though this story has so many layers to it about honesty, not being opportunistic, sharing the Good News of the Gospel, and not keeping it to ourselves…I am the one trampled at the gate!

Chapter 8 The Shunammite story is obviously not in the chronological sequence since Gehazi is in the story.  But it is a story about trusting the word of God.  She was told to pack up her belongings and leave for 7 years.  Would you?? She did and was blessed for her obedience!

I am feeling pretty down today…first I am trampled at the gate…now I would be eating my own children in hunger because I wouldn’t have left!

The Murder of Ben-Hadad (he is the King of Aram).  I bet they don’t teach this story is children’s ministry!  So the King of Aram has a sickness (we can pretend it is Covid).  He sends Hazael to Elisha to find out if he will survive it.  The answer is YES…BUT Elisha offers up some extra information to Hazael:

I don’t think he processed all that because the only thing he saw was the crown on his head!  But wait…didn’t Elisha just say he was going to survive the illness??  Ain’t nobody got time for that-the crown is so pretty…so he waterboards him and kills him!

We end with a recap that you have read before: