I post this a lot because I love it:

Click here if you want to print it.  If you don’t have a color printer,  I love it so much I would be happy to mail you a copy.

We are at the 2 arrows that point to Jeroboam and Rehoboam.  One line will fall into enemies’ hands-Assyria.  The other will fall into enemy hands-Babylon.  Now, look at the two arrows that converge into The Return.  One is faded out on purpose.  The dark red WILL return to Jerusalem back to Jerusalem.  Those that return are called the ‘remnant people’.   Above and below the Kings are names in Red and Blue.  Red means they were horrible kings and worship may gods and Blue means they only worship 1 God– The Lord.  Next to the names (written in blue) are the Prophets that God raises up to give a message (usually a warning) to the kingdom during that king’s reign.  I hope all that made sense, if it didn’t please let me know, it’s important.

1 Kings chapter 12- The Divided Kingdom.- Not to sound like a broken record but just in case you jumped in today, from the beginning of time God set it up to be our King (Theocracy).  The people begged for a “human” king, and even though they were warned this was a bad idea, God gave them one to show them they were wrong (Monarchy-Saul, David then Solomon) Well, that’s not working either so now we will try a Divided Kingdom-I am guessing that’s not gonna work either.

I think Chapter 12 is pretty clear and doesn’t need a recap…but if I did,  I would have talked about how obvious it is that the apple didn’t fall from the tree.  Rehoboam should have consulted with the Lord!  Second to that was the wise counsel, which proved to be wise.  BUT he decided to take his advice from his cronies instead who probably only hung out with him for the extravagant lifestyle (it’s easy to make friends when you are stinking rich).  Why would the gang want him to have less money?  Actually, they saw dollar signs in their eyes and said…MORE MONEY!

This is the vehicle God used to fulfill the prophecy we read 2 days ago when the prophet tore the cloak into pieces representing the Nation. The leaders of this rebellion sing an old song from the time this same thing happen to his grandfather David (I kid you not) 2 Samuel 20:

“Now a troublemaker named Sheba son of Bikri, a Benjamite, happened to be there. He sounded the trumpet and shouted,

“We have no share in David,
no part in Jesse’s son!
Every man to his tent, Israel!”

The Kingdom divides Judah/Benjamin in the South and the other 10 tribes in the North.  BOTH men were wrong!  Rehoboam should have lightened the work/tax load off the people which his father created from all the building projects and Jeroboam should have followed God’s precepts about who gets to appoint a king…Only God!  The Covenant is only promised through the royal line of David, and Jeromoab just messed up and took 10 tribes with him!

It is obvious that Jeroboam is insecure and paranoid about his followers so he appeased the people by making “local” places to worship so they didn’t have to travel all the way to Jerusalem (where they would come to their senses!!)  He builds golden calves closer to home for them! Calves or bulls were pagan worship rituals usually to worship fertility gods. What in Sam Hill is everyone thinking? Have they just tossed out everything they knew about the Temple??  (reminds me of the Song from the Alter to the Door by Mercy me!).

Wait!  Flag on the field!!  What about the priests that are required to take care of the place of worship?? Oh, they are in Jerusalem!  So what do we do??

31 Jeroboam built shrines on high places and appointed priests from all sorts of people, even though they were not Levites.

Have Mercy!  This post it too long!  I will breeze through the rest so you can get about your day! (If unleashed today I could write all day on this)

Chapter 13- A very specific prophetic warning was told to Jeroboam–

‘A son named Josiah will be born to the house of David. On you he will sacrifice the priests of the high places who make offerings here, and human bones will be burned on you.’” 3 That same day the man of God gave a sign: “This is the sign the Lord has declared: The altar will be split apart and the ashes on it will be poured out.”

And the altar DID split so clearly this Josiah situation is going to happen.  And it will….in 300 years.

OK, wrapping it up, the rest of the chapter is cool to read but note the introduction to “false” prophecy and that the author made an example from the animals.  The animals showed more self-restraint than humans.

“The Lord will raise up for himself a king over Israel who will cut off the family of Jeroboam. Even now this is beginning to happen. 15 And the Lord will strike Israel, so that it will be like a reed swaying in the water. He will uproot Israel from this good land that he gave to their ancestors and scatter them beyond the Euphrates River, because they aroused the Lord’s anger by making Asherah poles.16 And he will give Israel up because of the sins Jeroboam has committed and has caused Israel to commit.”

Mark God’s words…it is going to happen!  He uproots them alright.  As we continue I have a choice of 2 handouts.

Names!  We are about to read about a lot of Kings.  Sometimes it can get confusing as to what side they are on.  I use the timeline handout (above) BUT this is a good one to write a note next to or if you like checklists you can cross them off as we read.  Click here to print a copy. 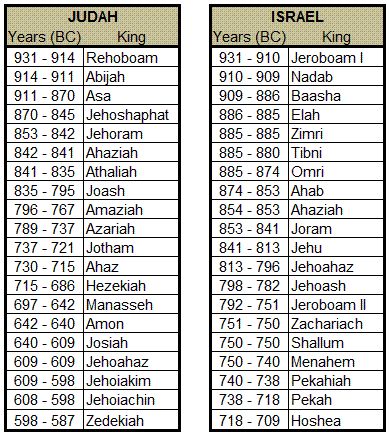 I am a geek and I like to have a list of the King lined up with the year range and the Prophet that is raised up along with it.  So this is the one I use.  Click here for this one.  Either is fine.  Just your preference.