Moses gave 5 excuses why he should not be put on God’s mission. (I usually come up with more than 5).

In chapter 4 we see a foreshadowing of the first and last plague that will occur.

So Moses headed to see the Pharoah with the staff of God in his hand. (vs. 20) 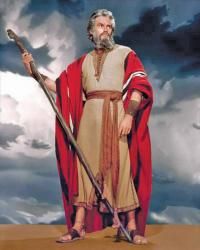 The Lord told Moses he would harden Pharoah’s heart. “21 The Lord said to Moses, “When you return to Egypt, see that you perform before Pharaoh all the wonders I have given you the power to do. But I will harden his heart so that he will not let the people go.”

The Hebrew word here is chazaq.  It means to strengthen or to fortify.  (Not change his feeling)

I know what you are thinking…Zipporah could be a knife salesman on QVC!  I thought the same thing! 😂

24 At a lodging place on the way, the Lord met Moses and was about to kill him. 25 But Zipporah took a flint knife, cut off her son’s foreskin and touched Moses’ feet with it. “Surely you are a bridegroom of blood to me,” she said. 26 So the Lord let him alone.

Circumcision was an important symbol of the Abrahamic Covenant, and the lack of circumcision would mark a person as cut off from God’s people (Genesis 17:9–14). For Moses to neglect to circumcise his son was an affront to God as if he were saying that he and his family did not truly belong to God. How could Moses be an effective leader of God’s people if he were in violation of God’s clear command?

Moses never had his son circumcised. Why would they be? He was raised Egyptian!  So his wife swiftly secured the covenant with a flint knife.  That’s why I carry a pocket knife in case a mom ever needs to borrow it. 😬

I don’t remember if we talked about it (or if I just had the conversation with myself 🤪) Look for the ‘all caps’ LORD in the scriptures throughout the Bible.  When it is all caps it is the Hebrew word YHWH, we translated it to Yahweh or Jehovah.   In theology, YHWH is a tetragrammaton (“a word having four letters”).   Yahweh is the encompassing “I AM”.  The LORD has always been, He is the beginning and the end of time,  He is utterly independent.  God is constant, he is the same yesterday, today, and forever…I could go on!

Chapter 5-  We are in Egypt and we have these 2 different groups of people.  The Egyptians obviously,  and the Israelites.  Let’s go back to the end of Genesis.  God was so good to put the families in Goshen, away from the city.  They were able to raise up their people away from the influence of polytheism.  The Pharaoh says “Who is the Lord?” The Lord is not one of the gods that is on the list for the Egyptians to worship, BUT Pharaoh’s name is on that list as a god.  So when Moses enters stage left and says “This is what THE LORD says”, it was putting the deity of Pharaoh as a match to a God that Pharaoh has never even heard of!  Oh Stars, that’s not good….but God has a bigger plan than “just” letting his people go.

Chapter 6- (my favorite of the 3)  Read the first part with authority aloud and emphasize the word “I” or “my”.

So then you get to the end of Chapter 6 and you roll your eyes and say “C’mon! another “family record”, I can skim over this”.  No!

Like all the others it starts with Reuben…Simeon….boring…..and then we get to Levi-Moses’ family. and it stops there.  This partial genealogy of Levi (which must be important if it is the first 4 letters of the next book we will read, Leviticus), establishes the position of Moses and Aaron.  Jochebed’s name means “the Lord is glory”.  She is the first person in the biblical text to have a name incorporated with His divine name.

Ready for the best part?? Not only is God establishing the position of Moses and Aaron’s family but the wife of Aaron is Elisheba.  Elisheba is from the tribe of Judah.  God is uniting the tribe of Levi (the priesthood) and Judah (kingship, royalty) lines:  Jesus is on every page of this Bible.

If that does not make sense to you…IT IS OK!  IT WILL ONE DAY…I PROMISE!