Jacob is called back to Bethel-back?  Yes.  This is where he wrote the Led Zeppelin song “Stairway to Heaven”😂 (Genesis 28)

Chapter 34 was God was not mentioned once.  In chapter 35 He is mentioned 11 times in name and 11 more times in place.  After the incident in Shechem, Jacob cleans house of the pagan world that rubbed off on them.  God reminds Jacob of the covenant, and that he is a new creation, his name will be Israel.

Israel is not having a good season of his life:

Remember to take notes on your genealogy  You will want them when we get to chapter 49:

21 Israel moved on again and pitched his tent beyond Migdal Eder. 22 While Israel was living in that region, Reuben went in and slept with his father’s concubine Bilhah, and Israel heard of it.

Issac dies.  (I guess he wasn’t on his deathbed after all when Jacob deceived him years ago).  I never noticed that before.

29 Then he breathed his last and died and was gathered to his people, old and full of years. And his sons Esau and Jacob buried him. ❤️

Chapter 36 begins… took his wives from the woman of Cannan….well, this can’t be good.  The structure of this chapter is very much like ch 25. After Abraham died there was an account of Ishmael’s genealogy (I truly believe to show us the love and grace given to a child even born in circumstances).  Here Isaac’s death is followed by Esau’s genealogy.

There are over 200 names mentioned: Esau may not have cared about God (not valuing his birthright, But God still cared for him)  If this chapter bored you, something is wrong with you.  JUST kidding, I was just seeing if anyone read this far.  Of course it was boring BUT go back and circle the word Edom (Edomites).  Just in this chapter, you will read it 10 times, and 131 times in the entire Old Testament.

Edom is Southeast of the Promised Land.  I know this does not mean a whole lot to you now, but it will 😁.  The Edomites make their home in the Sier Mountains.  Geography will play a big part in their battles and success.  Who can win fighting up a mountain??  Oh, yeah…God can.

The book of Obadiah would not have been written without Edom, and HEROD THE GREAT is an Edomonite!!  Not to get ahead of myself BUT if the Blessing was given to Jacob (not Esau), imagine when we get to the New Testament and Herod calls himself “king of the Jews”.  Oh no he di’int!  Yes, he did! (we will call them Jews not Hebrews after the captivity).  This Herod even refurbished the entire Temple before Jesus was born in an effort to get the Jews to forget he was from the line of Esau (it didn’t work).

Did you recognize any names?  No? Then you didn’t pay attention in the book of Job. 🤓

I have to tell you this.  I grew up outside of NYC.  Seeing or hearing about Broadway shows was common.  Did you know that I have heard the phrase Joseph and the Technicolor Dream Coat all my life and it wasn’t until recently that I knew it was from the Bible!

Chapter 37: Joseph is 17,  and lacks social skills (hmmm, like many today I guess).  His brothers hate him, and I don’t blame them. 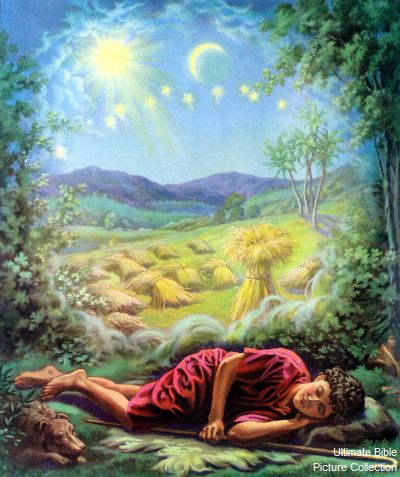 11 His brothers were jealous of him, but his father kept the matter in mind. (of course, he did.  He too was spoken to in dreams at Bethel)

I don’t care if you have never read this chapter or if you have read it 10 times.  Look for the details.  Joseph travels from Hebron to Shechem to Dotham: over 100 miles.  Of course Israel is going to worry about them in Shechem…last time they were there it did not turn out so great!

19 “Here comes that dreamer!” they said to each other. 20 “Come now, let’s kill him and throw him into one of these cisterns and say that a ferocious animal devoured him. Then we’ll see what comes of his dreams.”

Who saves him?  Rueben!  Is he trying to get back into good graces with his father after the ‘concubine incident’?  Look at the map above.  Dothan is on the trade route that heads to Egypt.  Coincidence or Providence??

Do you know what Providence is?  Providence is when God takes ordinary events and arranges them for a predetermined outcome.

If you are wondering what a cistern is:  it is like a rock well that holds water:

20 Sheckles of Silver was the price for a handicapped slave. 😢

31 Then they got Joseph’s robe, slaughtered a goat and dipped the robe in the blood.

Oh!  Jacob deceived his Isaac with a slaughtered goat.  Now it happens to him by his sons!

I really hope being in the Bible 24 days is making a difference in your daily walk.