Well, here we are at 3 chapters you may or may not have read before.  But that is not a reason to skim!  Read them like you have NEVER read them before!  No doubt you will see something new. 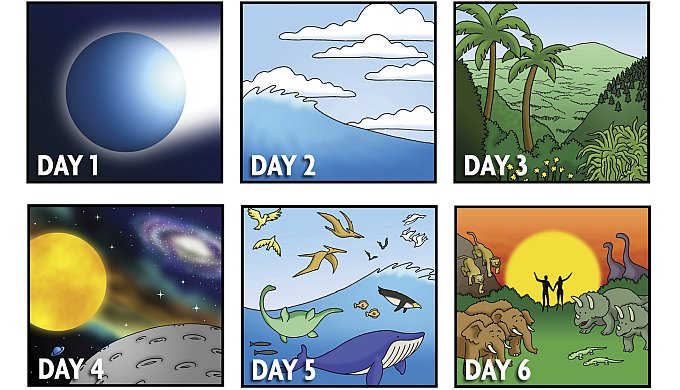 When you read the Bible, it is fun to look for things like the presence of the Trinity.  An example is Gen 1:26.  –  When I see the Trinity (God, Jesus, Spirit) I put a

1:1 “In the beginning God created the heavens and the earth. 2 Now the earth was formless and empty, darkness was over the surface of the deep, and the Spirit of God was hovering over the waters.”

Who was John writing about?  Jesus.

was at the Creation.  ❤️

SOAK IN EVERY WORD.  Why?  Because there are only 4 chapters in the WHOLE Bible that show us what life with God ‘was’ and ‘will be’ without sin.  The first 2 chapters of Genesis and the last 2 chapters of Revelation.  Everything in between is a hot mess!!

The Lord God said, “It is not good for the man to be alone. I will make a helper suitable for him.”- Genesis 2:18 NIV

The word translated “helper” is the Hebrew term ‘ezer. This word is even used of God, sometimes, noting that He is our Helper (Psalm 115:9-11).  God was Adam’s helper (but superior) and the animals were his helpers (but inferior).  God desired a helper that was equal to Adam.  I researched the different versions and the Hebrew translations and they all concluded “suitable/helper” suggests something that completes.  (Makes me think of Jerry Maguire’s “You complete me”). 😂

Right from the beginning of Chapter 3 (the 3rd word), we have the serpent. This serpent has been waiting for an opportunity such as this.  The serpent is Satan.   Satan was once a beautiful angel, called the morning star.  One day he wanted to BE God.  God cast him out of heaven for some time and eventually he will be cast again- next time into Hell.  But from Chapter 3 until Revelation 19, he will be roaming Earth doing everything in his power to usurp God’s plan.

16 And the Lord God commanded the man, “You are free to eat from any tree in the garden; 17 but you must not eat from the tree of the knowledge of good and evil, for when you eat from it you will certainly die.”

God gave this command to Adam. So of course the serpent was so crafty he went straight to her.  False Religion is taking a portion of what God says and then twisting it just enough to steer us away from what God asks of us.    Eve says to the serpent:  3 but God did say, ‘You must not eat fruit from the tree that is in the middle of the garden, and you must not touch it, or you will die.’”

See how not hearing something directly from the Word of God can get ‘twisted’ so quickly!  He never even said you would die if you TOUCHED IT.

After they ate the fruit they knew they had sinned.  How? (and note that with one sin, it spiraled down with each action)

This moment is the saddest moment in History.  This brings the word “death’ into creation.

John 8:44-He was a murderer from the beginning, not holding to the truth, for there is no truth in him. When he lies, he speaks his native language, for he is a liar and the father of lies.

After God speaks directly to Adam and Eve pointing out their role in the disobedience of listening to God…guess what happens???  He shows us how much He loves us regardless of our sin! ❤️ He offers a substitute for that death.  He will cover our sin so that we can be with him again.  The fancy word is “Substitutionary Atonement” (I am fancy sometimes!).  We see the First Foreshadow of the Crucifixion.

3:21 The Lord made garments of skin for Adam and his wife and clothed them. 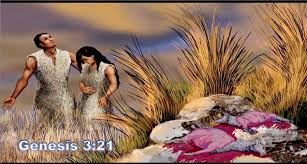 We see God’s Covenant of a substitutionary death. God killed something innocent to COVER them (that is where the skin came from).  The word atonement means to COVER.  The death of another covered their sin.  God set in motion the foreshadow of the Cross right here in Genesis 3

OK, one more thing I have to talk about or I will burst.  Look at the LAST verse of today’s reading.

After he drove the man out, he placed on the east side of the Garden of Eden cherubim and a flaming sword flashing back and forth to guard the way to the tree of life.  Gen 3:24

WHY??  Why did GOD  HAVE to guard the tree??  The Tree of Life was in the garden for immortality.  God could spend eternity with us before sin was in the world.  But God is Holy and  everything changed.  God cannot be in community with sin and it created a separation between us and Him.

So God states in 3:19 ‘until you return to the ground….’ Death is now a part of this fallen world.  Good or Bad?  Well, here is the deal: If God chose to leave the Tree of Life for us, we would live forever separated from God.  However, God loves us so much that he has placed an Angel to hide the Tree of Life from us so that one day we will all have a death and be reunited with God (and the Tree) and be in community with Him again. Forever.

So I ask you… Will we see this tree again in the Bible?  The Tree of Life?  We already read 2 of the 4 chapters in the Bible that show us in perfection…the other 2 are at the end ( flip to the last chapter of Revelation 🙂.  We eat from the Tree of Life in Heaven giving us eternal life again with the Lord. ) Pretty cool huh.

Revelation 22: 14 “Blessed are those who wash their robes, that they may have the right to the tree of life and may go through the gates into the city.