5 chapters today…but not hard!  You got this!

When we see it is just a Chronicles read, we know it is primarily going to concentrate on the tribe of Judah.  Remember Ezra is writing this book as a history lesson for the people that will return to rebuild a temple.  Looking back on the history they are going to want to trace the covenant line of “their” people, so that will be the tribe of Judah.

As I am reading I am doing some memory recall.  Just in case you jumped in late (or just need it) here are some things that make this reading crystal clear:

What makes sense now that we have read for 6 months:

“Give thanks to the Lord,
for his love endures forever.”

Let’s break down chapter 21…You can’t make this stuff up!!

Look at the drop from Jehoshaphat to Jehoram…the apple fell FAR from the tree.  The new king of Judah marries Ahab and Jezebel’s daughter.  What?? Why??? Ohhhh the humanity!  His father (Jehoshaphat) brought a huge revival to the nation by teaching the scriptures and trusting the Lord and his son marries the daughter of the most notorious Baal worshiper? (I am going to skim over 21:8 Edom and Libnah revolt, we will talk about that later this week). Just put the word Edom in your pocket for now. (verse 10:To this day Edom has been in rebellion against Judah)

So how bad was Jehoram!  Bad!

Elijah the prophet writes him a letter. This is the only record we have of a prophet from the Northern Kingdom rebuking a king of the Southern Kingdom. (All the other prophets God sent to Judah were from Judah). The letter stated:

“Not a son was left to him except Ahaziah, the youngest.”

God made a Covenant in 2 Samuel 7 that the line of David will bring the Messiah.  If the Lord had not left him one son to carry the kingship…the Covenant would have been broken.

When God makes a promise…it’s better than a pinky promise!

Jehoram- end of the chapter:

He passed away, to no one’s regret, and was buried in the City of David, but not in the tombs of the kings.

(I keep posting this image because it helps me, so maybe it helps someone else?)

How can his son be worse you ask???

Well, who is Ahaziah’s mother? 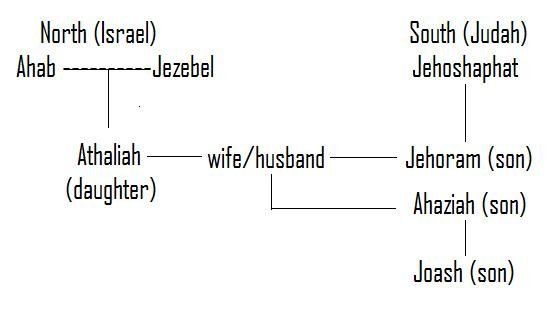 His mom is Athalia.  His grandmother is Jezebel!!

“He too followed the ways of the house of Ahab, for his mother encouraged him to act wickedly. 4 He did evil in the eyes of the Lord, as the house of Ahab had done, for after his father’s death they became his advisers, to his undoing. 5 He also followed their counsel when he went with Joram son of Ahab king of Israel to wage war against Hazael king of Aram at Ramoth Gilead.”

The irony!  Their grandfathers made an alliance and did the same thing at the same place years ago!

Then I read this:   “He was brought to Jehu and put to death….While Jehu was executing judgment on the house of Ahab, he found the officials of Judah and the sons of Ahaziah’s relatives, who had been attending Ahaziah, and he killed them.

If he killed his sons who will be king?  What will happen to the Davidic Covenant??

THIS IS CONFUSING (for me) so let’s break it down:

When Athaliah (Jezebel’s daughter) the mother of Ahaziah saw that her son was dead, she proceeded to destroy the whole royal family of the house of Judah (so her family line would survive and not the line of Judah). 11 But Jehosheba, the daughter of King Jehoram, took Joash (her brother) son of Ahaziah and stole him away from among the royal princes who were about to be murdered and put him and his nurse in a bedroom. Because Jehosheba,[f] the daughter of King Jehoram and wife of the priest Jehoiada, was Ahaziah’s sister, she hid the child from Athaliah so she could not kill him. 12 He remained hidden with them at the temple of God for six years while Athaliah ruled the land.

So for 6 years the heir to the throne, Joash,  was hidden while Jezebel’s daughter ruled the line of Judah.

OK, I lied.  I said this was not a hard read.  My head is spinning with names, but I think I drew enough arrows to have it in my head.

Chapter 23:  Picture the Priests of the Temple, huddled up making a plan (in my head it looked like a coach and his football players) 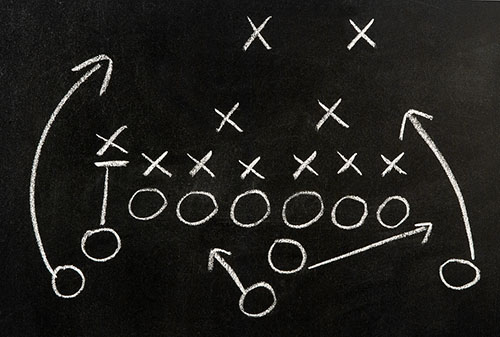 EVERY detail was planned out to make sure the House of David Survived, even down to making sure no blood came near the Temple.  THE LINE OF DAVID SURVIVES!!!